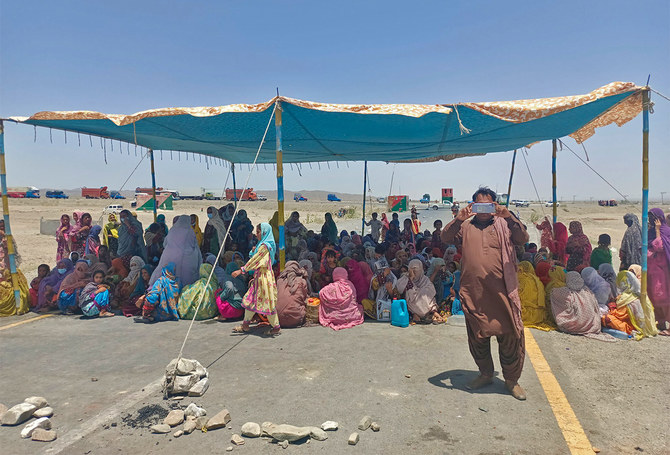 QUETTA: Hundreds of protesters blocked an under-construction highway in Balochistan for the second day on Wednesday to protest against the arrest of two women, one of whom security officials described as a would-be suicide bomber who was planning to target Chinese citizens.

Police arrested one woman, Noor Jahan Baloch, who they said planned to blow herself up near a convoy of Chinese nationals and that they had recovered explosives and detonators from her.

On Tuesday, officials confirmed a second woman had also been arrested.

Arrests of women are rare in Balochistan and the detentions have enraged supporters. The protesters said they would continue their sit-in until the women, who they claimed were innocent, were freed.

“It is all lies,” Dost Gulzar, a political activist who is leading the protest, told Reuters.

The arrests came two weeks after a woman suicide bomber blew herself up on a university campus in Karachi, killing three Chinese teachers.

The woman belonged to a proscribed militant group, Baloch Liberation Army (BLA), which has waged a violent secessionist insurgency in Balochistan and has targeted Chinese interests in the province.

The sit-in is taking place in the town where the women were arrested, Hoshab, some 415 miles (670 km) south of Quetta. Surab-Hoshab (N-85) highway links Quetta with Gwadar port and was built under the China-Pakistan Economic Corridor (CPEC) initiative.

China plans to invest over $65 billion in Pakistan under CPEC — a part of Beijing’s Belt and Road Initiative (BRI) to seek road and sea trade routes to connect with the rest of the world.

The local administration is negotiating with the protesters, asking them to unblock the highway as a large number of vehicles are stuck, a senior official from the Balochistan police told Reuters, requesting anonymity.

Rights activists have long accused security forces of extrajudicial abductions and killings in Balochistan. Security officials say the accusations are exaggerated and not always linked with the state.