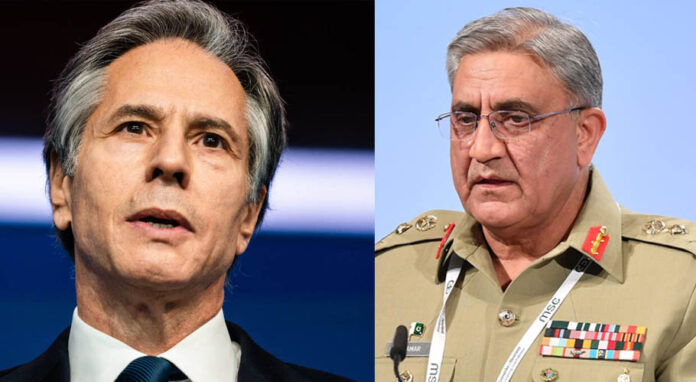 ISLAMABAD: Hours after Chief of Army Staff (COAS) Gen Qamar Javed Bajwa and US Secretary of State Antony Blinken held a telephonic conversation on Wednesday, the top Washington diplomat announced a coalition of NATO-led troops in Afghanistan will leave the country in coordination with a planned withdrawal by September 11.

Around 7,000 non-US forces from mainly NATO countries, but also from Australia, New Zealand, and Georgia, outnumber the 2,500 US troops in Afghanistan but still rely on US air support, planning, and leadership for their training mission.

Gen Bajwa said that Pakistan will always support an Afghan-led and Afghan-owned peace process based on the mutual consensus of all stakeholders.

During the conversation, Blinken also acknowledged Pakistan’s continuous efforts for peace and stability in the region and pledged to further enhance bilateral relations, the statement added.

Blinken, who according to a State Department statement is in Brussels to “reaffirm the US commitment to the Transatlantic alliance”, said in Belgian capital it was time for NATO allies to make good on its mantra that allies went into Afghanistan together and would leave together.

“I am here to work closely with our allies, with the [NATO] secretary-general, on the principle that we have established from the start: In together, adapt together and out together,” he said in a televised statement at NATO Headquarters.

“We will work very closely together in the months ahead on a safe, deliberate, and coordinated withdrawal of our forces from Afghanistan,” Blinken said, standing alongside NATO Secretary-General Jens Stoltenberg.

While NATO foreign and defence ministers were scheduled discuss their plans later on Wednesday via video conference, a senior NATO diplomat told Reuters that no ally was expected to oppose US President Joe Biden’s formal announcement for a complete US withdrawal of troops by September 11.

Japanese Ambassador to Pakistan Kuninori Matsuda, in a meeting with COAS Bajwa at the General Headquarters (GHQ) on Wednesday, praised Pakistan’s role for peace and stability in the region, particularly Afghan peace process, and vowed to further enhance ties with Pakistan.

Gen Bajwa said that Pakistan values its relations with Japan and acknowledges its efforts for regional stability.

The army chief and the ambassador discussed the regional security situation and measures to enhance bilateral cooperation in various fields.