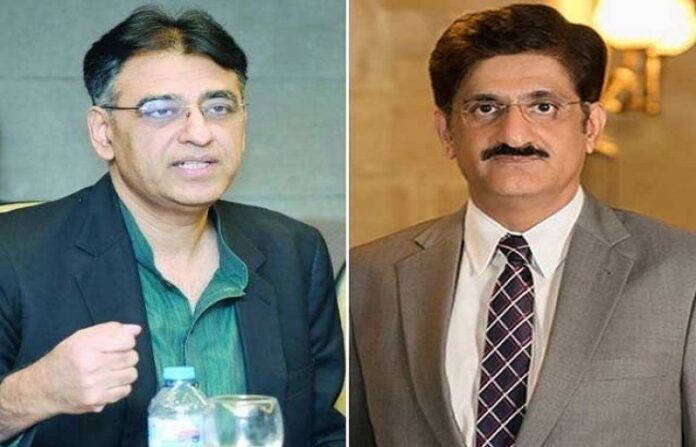 KARACHI: The federal and Sindh governments have expressed the resolve that problems being faced by the people of Karachi will be resolved jointly by taking all stakeholders on board.

Murad Ali Shah said that it has been decided by the federal and provincial governments that all issues of Karachi will be resolved together. He said that Mahmoodabad Nullah has almost been cleared from encroachments and work to remove encroachments from Gujjar Nullah will be started soon as per orders of the Supreme Court.

“To begin with, work started on the Mehmoodabad Nullah, in which 205 houses were broken or completely levelled to clear the nullah.”

On encroachments in the city, he said that an initial survey showed that thousands of structures need to be removed. So far, the government has not faced any resistance while removing encroachments from the nullahs, the CM added.

Speaking on the occasion, Asad Umar recalled the federal and provincial governments had already promised to work together for the development of Karachi. He said encroachments at the drains are being removed as per joint decision, adding that work on Karachi Circular Railway project is underway and hopefully will be completed before the start of ML-1 project.

Asad Umar said that political parties would get several opportunities for politicking; however, there is a need to work together for the country’s development.

Addressing the criticism about Pakistan still not having placed an order for the coronavirus vaccine, Umar said, “We have not lied to the nation about vaccine procurement.” He added that the vaccine will reach Pakistan by March.

Earlier, the chief minister chaired Karachi Coordination Committee session to deliberate over Mehmoodabad Nullah’s encroachments. The session, attended by key officials from federal, provincial, and city governments and other institutions, was briefed that the 19.03-kilometer long nullah had a number of encroachments and some of which have been removed.

The CM said those aggrieved as a result of this clearance drive will be rehabilitated. He acknowledged the understanding ensured by those whose structures are being razed down in the drive.

“It is our city and we will not leave affectees alone,” said the CM, noting that the government is looking after their rehabilitation arrangements.

The CM said the committee has handed over Rs30 million to commissioner Karachi for the purpose of resettling the victims of nullah clearance drive.