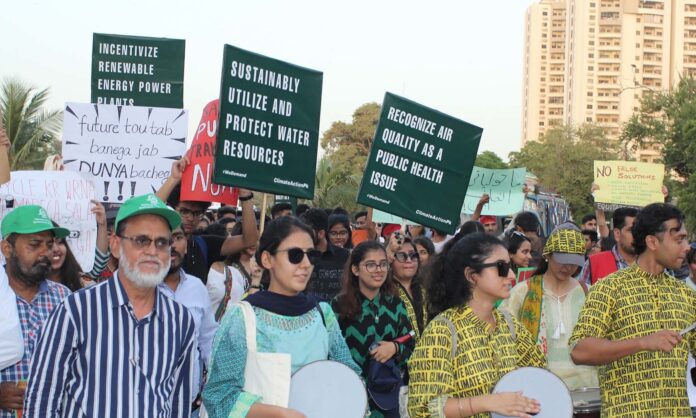 Activists belonging to around 10 political parties and civil society organisations took out a rally, ‘People’s Climate March’ on Sunday evening to highlight the adverse impact of climate change, especially the environmental disaster unfolding in Malir and adjoining areas, because of agricultural lands being destroyed for the development of mega housing projects.

The rally was stopped by the police when it tried to march towards Bilawal House, according to statements given by the organisers and witnesses.

The marchers including men, women and children chanted slogans against Bahria Town Karachi, DHA Karachi, the occupation of locals’ lands, construction of the Malir Expressway, destruction of agricultural land in Malir and Gadap, demolition of homes located on Gujjar and Orangi Nullahs, and other issues.

The move by the police led the march participants, who were affiliated with the Awami Workers Party, Indigenous Rights Movement, Karachi Bachao Tehreek, Malir Expressway Action Committee, Mazdoor Kisan Party and others, to stage a sit-in on the service road at some distance from the Bilawal House.

Hafeez Baloch, an activist affiliated with the Indigenous Rights Movement, said the environment and green belts in Malir and Gadap were being destroyed because trees were being cut in large numbers, hills were being grounded and the area’s gravel and sand were being excavated for housing projects.

Khurram Nayyar, an activist with the AWP, stated that police had blocked the protesters’ way with around 10 vehicles. When some participants managed to breach the barricade, police officials again stopped them by placing another vehicle.

He warned that these activities would likely cause an ecological disaster in the surrounding areas of Karachi. He said the participants had wanted to draw the attention of the PPP leadership towards the issue but the police did not allow them to move further, prompting them to stage a sit-in on the service road near Bilawal House.

It is pertinent to note that earlier this week, at a presser, the organisers and allies of the People’s Climate March had stated that the purpose of their event was to organise a people-led response to the environmental crisis with victims of climate injustice at the forefront.

On the occasion, they had also shared a set of demands including an end to the demolition of working-class homes and villages and the right to shelter of the displaced.

They also demanded a transparent compensation process, and resolution of issues of identity cards, besides the constitution of a rehabilitation committee.

Another demand was for a bill to be passed in reference to the affectees of the Gujjar and Orangi Nullahs, the Karachi Circular Railway and Haji Lemo Goth with the same urgency as was being displayed to “protect buildings”. It was also demanded that the affectees be given alternative housing of 120 square yards in their districts.

HYDERABAD: Sindh Police on Saturday booked local leaders and supporters of Pakistan Tehreek-e-Insaf (PTI) in the FIR registered on a complaint of a worker...
Read more
KARACHI