The USA needs Bangladesh for its Asia-Pacific strategy 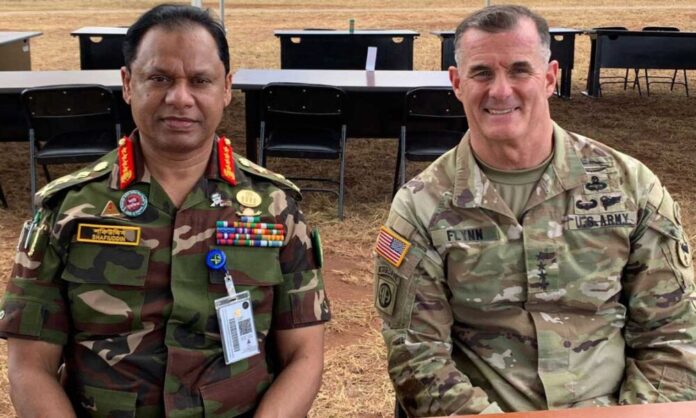 Bangladesh is a key ally of the USA in South Asia. On issues like regional and global security, counter-terrorism, and climate change, the two countries enjoy substantial collaboration. Bangladesh has played an important role in the Obama Administration’s major international development projects, including food security, healthcare, and the environment.  In 2012, the two countries inked a strategic conversation agreement. In 2015, the US Ambassador to Bangladesh, Marcia Bernicat, praised relations as “vibrant, multifaceted, and important.

The US strategy with Bangladesh places a premium on political stability, human rights, and democracy. Bangladesh is also seen by the USA as a moderate Muslim friend among Islamic countries.

One of Bangladesh’s most important strategic military partners is the USA. Defense cooperation between the USA and Bangladesh is growing day by day. Regular joint exercises are carried out, particularly in the Bay of Bengal. The United States Pacific Command engages the Bangladesh Armed Forces on a regular basis. The USA also assisted in the formation of the Bangladesh Navy’s elite SWADS marine unit, which is fashioned after American and South Korean special forces.

Bangladesh is the greatest contributor to UN peacekeeping operations in the world. Bangladeshi peacekeeping missions have benefited greatly from the sponsorship of the USA.

Strong and expanding economic ties between the two nations are the bedrock of the relationship. Bangladesh has suddenly developed into one of the world’s fastest growing economies during the previous five decades. Bangladesh is on track to become the world’s 24th largest economy in 10 years, with an expected growth rate of 7.2 percent in 2022. Bangladesh’s growth and resiliency are built on development and foreign direct investment, and the USA remains a dedicated partner.

Bangladesh is located in the heart of the Indo-Pacific, a region that the Biden Administration has prioritized for economic connectivity, while bilateral relations are also focused on shared democratic values, free enterprise, resilient supply chains, and the prosperity and health of both countries’ people.

We see major areas of engagement that may be strengthened to deepen defense and security cooperation as both celebrated 50 years of US-Bangladesh relations on 4 April 2022.

This was notably true during the pandemic, when Bangladesh delivered over 6 million pieces of personal protective equipment to the USA during the first catastrophic wave of covid-19.

However, 2021 was a challenging year for relations between the USA and Bangladesh.  Washington had imposed sanctions on Bangladesh’s Rapid Action Battalion (RAB) and several current and former officers for a long history of human rights violations, including extrajudicial killings, on 10 December 2021. The Biden Administration did not extend an invitation to Bangladesh to the virtual Summit for Democracy that same month.

According to the research, there has been widespread impunity for security force abuses and corruption in Bangladesh. But Bangladesh criticized the report.

Amidst these, the signing of a draft defense cooperation agreement during Undersecretary of State Victoria Nuland’s visit to Dhaka exemplifies that effort. However, Washington may continue to regard Dhaka as a security partner in the region. The USA now wants to build a strategic relationship with Bangladesh.

US President Joe Biden has voiced his belief earliar that the Dhaka-Washington relationship will thrive for the next 50 years and beyond.

This visit is very significant for Bangladesh and the USA in the region. The USA and Bangladesh have strengthened their defence ties further through this visit

In a letter to Bangladeshi Prime Minister Sheikh Hasina Wazed, he noted that ‘Our defense cooperation is stronger than ever,’ adding that the Bangladesh Coast Guard and Navy are essential allies in ensuring a free and open Indo-Pacific area, as well as contributing to the regional fight to combat human and illicit drug trafficking.

According to the US government websites, Bangladesh has received $66.9 million in Foreign Military Financing (FMF) and $7.29 million in International Military Education and Training (IMET) aid from the USA since 2015. FMF funding includes $10 million in bilateral programmes and $56.9 million in regional FMF for the Bay of Bengal Initiative.

Through FMF support, the Department of State’s Bay of Bengal Initiative aims to improve civilian and military actors’ capacity to detect illicit activity within their borders and in the region, build networks and habits of cooperation to allow countries to share information, develop their capacity to respond quickly to illicit activity, and support our partners in enabling a rules-based order in the Indian Ocean Region.

In support of the Indo-Pacific Strategy, US security aid to Bangladesh has improved maritime security, freedom of navigation, and humanitarian assistance/disaster response capabilities. These funds have been used to purchase patrol boats for the Bangladesh Army, additional patrol vessels for the Navy, international peacekeeping and border security missions; electronic and mechanical upgrades to the Bangladesh Navy’s fast patrol boats and former US Coast Guard cutters; technical and professional training for Bangladesh military and Coast Guard personnel; and joint military exercises. This assistance has helped Bangladesh significantly in its efforts to improve its marine domain knowledge and control.

On April 18, Bangladesh Army Chief Ge SM Shafiuddin Ahmed visited the USA at the invitation of US Army Chief of Staff Ge James C McConville. This visit would help strengthen bilateral defence ties. Bilateral defence ties may boost bilateral relations.The  USA needs Bangladesh in the region and vice versa. This visit conveyed the message that despite having some bilateral problems, both countries are very interested in strengthening further bilateral ties. This may help solve bilateral problems. Bangladesh and the USA must engage as trusted partners to deal with some common problems.

According to the media reports, General Shaf paid a courtesy call to Gen Daniel R Hokanson, the head of the National Guard Bureau and a member of the Joint Chiefs of Staff, Vice Chief of Staff of the Army Gen James M Martin, Marine Corps Assistant Commandant Gen Eric M Smith, and Director General of Southeast Asia Laurie Abel of the Office of the Under Secretary of Defense for Policy from April 20 to 22.

During the meetings, issues of common interest to the two forces were discussed, including UN peacekeeping missions and post-disaster humanitarian aid.

General Shafi was also inducted into the Near East South Asia (NESA) Center’s Hall of Fame as a past graduate of the NESA programme at the National Defense University.

According to a news release from Bangladesh’s Permanent Mission to the United Nations, the conversations were quite successful and highlighted many facets of Bangladeshi peacekeepers’ vital commitment to UN operations.

The USA intends to help Bangladesh modernize and institutionalize its armed forces by supplying defence equipment and training.

The United States emphasized the signing of two defence accords – GSOMIA and ACSA – that serve as foundations for defence trade and cooperation.

However, the majority of the US military assistance to Bangladesh is in the form of training for defence professionals and joint exercises between two forces. The US Pacific Command engages the Bangladesh Armed Forces on a regular basis. US Defense Secretary Mark Esper paid a visit to Bangladesh Prime Minister Sheikh Hasina and discussed military cooperation between the two countries, among other things. General Shafi paid his US visit this month after the successful completion of ‘Security Partnership Dialogue’ in April. 2022 in Dhaka.

This visit is very significant for Bangladesh and the USA in the region. The USA and Bangladesh have strengthened their defence ties further through this visit.