Gross miscalculation of the establishment

The establishment failed to realise how popular Imran Khan is 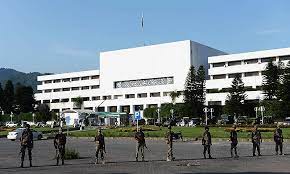 The year was 1977, and Prime Minister Zulfiqar Ali Bhutto (ZAB) was brimming with confidence. Lt. Gen. Ghulam Jilani Khan (Jill) was heading the ISI which also included the ‘ Political Surveillance Wing ‘. On the input from Jill, ZAB decided to surprise the divided opposition. He dissolved the assemblies ahead of schedule and announced national elections. An alliance of nine political parties called Pakistan National Alliance (PNA) was waiting in the wings to take on the ‘Quaid-e-Awam ‘. They even applied for a single election symbol for a one-on-one contest with the PPP. So, the contest was between the Talwar (sword) and the Hal (Plough). In the original 1973 Constitution, there was no provision for a caretaker set-up, so ZAB continued as an interim PM and so did the four Chief Ministers.

Elections were held for the National Assembly followed by the Provincial a day later. The PM and the four CMs managed to get elected unopposed, which created doubts in the mind of the people about the fairness of the contest. It was ZAB’s dream to get a two-thirds majority in the legislature thus enabling him to amend the Constitution.

He realized his lifelong desire but it sparked an organized protest against his regime. The religious card was also thrown in, it was called ‘Nizam-e-Mustafa Movement’. While Air Marshal Asghar Khan was the star of this uprising, the religious right took control of the streets. Though the protests were nationwide, Lahore was the epicentre of the conflict.

Punjab under Nawab Sadiq Hussain Qureshi had insulated the party leadership from the grassroot workers. Chants of ‘Hul Chalado‘  (Use the Plough) were all over. The armed forces were called for the maintenance of law and order. When it was evident that ZAB was politically done with, COAS Gen Ziaul Haque deposed the elected PM on 5 July 1977.

The PM was kept in confinement at the Murree Governor’s House. Fresh elections were announced in accordance with the 90 days constitutional requirement. Before his release, the General went to see ZAB who gave him a piece of his mind. The threat of Article 6 was not taken seriously at that time.

ZAB arrived at the Lahore Airport to a hero’s welcome that surprised everyone. He was staying at the Nawab’s residence located in Shadman II. There was a sea of supporters who refused to go away. Occasionally ZAB would appear on the balcony with a request to the people to go home but they kept chanting “Quaid-e-Awam” “Fakhar-e-Asia” (Leader of the Masses, Pride of Asia). As I had to go to work in the morning, I finally left around midnight. The establishment had miscalculated the public support of the fallen leader. Events that followed are now a part of our chequered political history. ZAB was physically eliminated through ‘Judicial Murder’ on 4 April 1979 but his legacy lives on.

On 9 April 2022 another elected PM was voted out of power by a coalition of diverse political parties called Pakistan Democratic Movement (PDM). It started as a ‘Mehengai (Inflation) March, but ended up as a ‘Freedom Movement ‘. While the personal credibility and honesty of Imran Khan (IK) was not an issue, the performance of his team was. After failing to win public support, the opposition decided to work on a no-confidence motion in Parliament.

To put this country of over 220 million people back on track, a free, fair and credible election is the only way forward.

Within days the pieces started to fall in place. The PDM, establishment and the judiciary all seemed to be working in tandem to remove the PM. The movement gained strength by the hour. IK termed it a foreign conspiracy while the establishment admitted it was only interference. In the past sovereignty of several developing countries has been trampled through external involvement with the connivance of compromised local support.

For the major part of its existence the Islamic Republic of Pakistan has been a satellite state obeying orders of foreign masters even against its national interests. The involvement in the Afghan Crisis has been disastrous for the nation with massive collateral damage yet no leader had the courage to say “No More”’. Only IK had the moral strength to say “Absolutely Not” which was not taken lightly. As the PM held his ground, it was decided to get rid of him as the popularity ratings of his government were very low.

Another gross miscalculation was done by the establishment. While the performance evaluation of the regime was marginal, the personal popularity of the PM was intact. When he decided to expose the foreign interference as a direct attack on the freedom of the nation, the people responded to his call as they trusted his leadership.

His demand for fresh elections is gaining grounds. National elections are now unstoppable. Any attempts to keep IK out through the traditional rigging or manipulation will result in massive street protests. Unfortunately, it may prove to be a rerun of the 1977 imbroglio from which the country has still not recovered.

History is witness to the fact that in developing countries popularly elected leaders who stand up for national interests are physically eliminated. The personal security of IK has to be taken very seriously. From his death cell in 1979, ZAB predicted that if he was harmed, “The Himalayas would cry and the water of the River Indus would turn red.”. This did not happen then but it may happen this time around. All stakeholders must exercise extreme caution in the best interests of Pakistan to contain destabilization of any kind.

Establishments worldwide have historically failed to sense the sentiments of the people, and as such they usually miscalculate their actions which then lead to disastrous consequences. Gone are the days when the will of the people could be suppressed through ‘Thanas and Patwarkhanas’. Information highways cannot be blocked. In the 20th century. Tagore remarked that, “A country with a free press has never faced famine”. I am sure in the 21st century with the available technologies of mass communication, uproar of the masses will reach every corner of the country from Khyber to Karachi and Gwadar. From the election results from the NA-33 constituency of Hangu, the voters have spoken, Kaptaan has come ahead.

As already claimed the establishment should be apolitical, which is a good sign but then the stables have to be cleansed of the ‘Siasi Basta B’ whose record it has been maintaining aND updating, followed by the necessary surveillance. Either the entire record of the bad characters should be returned to the original police stations from where it came or made public together with details of their misdeeds and crimes against the nation.

Pakistan has been a constitutional democracy since 14 August 1973. Every state institution must operate within its own domain, thereby ending the ‘Zia Dark Ages’ that have denied the entry of light needed to march forward in the new millennium.

The scourge of external interference has to be totally wiped out, and the law of the land must come hard against perpetrators who sell national interests for short-term personal gains. The people’s mandate has to be respected; assemblies should be allowed to complete their terms. The entire state apparatus has to be apolitical, major reforms are needed in the bureaucracy, judiciary and the law enforcement agencies.

Establishment calculations do not work, never have and never will in the future. To put this country of over 220 million people back on track, a free, fair and credible election is the only way forward.