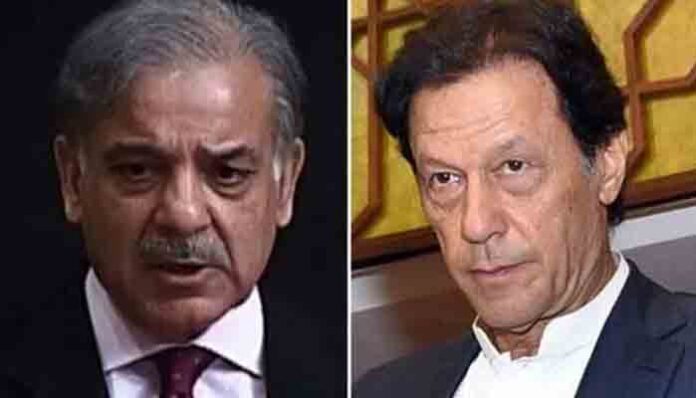 Prime Minister Imran Khan and the Leader of the Opposition in the National Assembly Shehbaz Sharif have refused to sit together for years.

However, the situation has taken a turn after over 20 people recently froze to death in Murree, and now, the PM will have to sit with not just the opposition leader in the National Assembly but also in the Senate as well before January 21 to comply with an order of the Islamabad High Court (IHC).

IHC’s Chief Justice Athar Minallah, while hearing a petition pointing out lack of preparedness and response of pubic functionaries and state institutions in Murree, has ordered the National Disaster Management Authority (NDMA) to request the PM to hold a meeting of the National Disaster Management Commission (NDMC), of which the premier is the chairperson and opposition leaders, among others, are members.

“NDMA shall forthwith request the Chairperson of the Commission i.e. the worthy Prime Minister to call an urgent meeting of the Commission and conclude the proceedings before the date fixed,” IHC’s top judge stated in the order.

“The Chairperson of the Commission i.e. the Prime Minister is expected to call a meeting and conclude the proceedings before the date fixed,” Justice Minallah stated. “In case the meeting of the Commission is not held before the next date of hearing, then the head of NDMA and Principal Secretary to the worthy Prime Minister shall appear in person to explain why proceedings may not be initiated against persons responsible for exposing lives of the citizens to risk,” the order read further.

It is pertinent to note that the order has come after the petitioner Hammad Abbasi, a local resident of Tehsil Murree, approached the court, saying the authorities failed to ensure timely recovery of the stranded citizens resulting in the death of over 20 people, including nine children. Subsequently, the court directed Imran through NDMA to convene a meeting of the NDMC before January 21 as otherwise action will be taken.

It merits mention that the NDMC meeting has not been held for the last three years. In response to the court’s query, it emerged that the commission has held only five meetings between 2007 and 2018.

The last meeting was held on 28-03-2018, the court read, noting that no member of the commission, including the leader of the opposition in the Senate and National Assembly, had ever requested to call a meeting of one of the most important and high powered statutory bodies in the country established to ensure measures are taken in order to protect the lives and properties of the citizens.

Under section 3(2) of the NDMA Act, the composition of the commission states that the prime minister of Pakistan is the chairperson, while leaders of opposition in the Senate and in the National Assembly; ministers for defence; health; foreign affairs; social welfare and special education; communications; finance; interior; governor Khyber Pakhtunkhwa (for Federally Administrative Tribal Areas); chief ministers of all the provinces; prime minister of AJ & K; chief executive of Gilgit Baltistan; chairman JCSC or his nominee; and representatives of civil society or any other person appointed by the prime minister are its members. Chairman NDMA is the secretary of NDMC.

The court, while keeping the tragic Murree calamity in view, further ordered that the commission shall enquire why the provisions of the NDMA Act have not been implemented and why the Rawalpindi District Management Authority remained non-functional. The commission, it said, shall also enquire whether a district plan covering the sub-district of Murree was prepared and why it was not acted upon.

The court order also added that the commission after fixing the responsibility of officials or entities involved in the failure to implement the provisions of the NDMA Act, shall make them accountable by proceeding in accordance with the law.

Also, it adds, the commission shall probe lack of preparedness and response, which led to the traumatic loss of precious lives including nine children and take such action as required under the law.

“NDMA shall submit a report on behalf of the Commission on the date fixed,” the order read. Justice Minallah said that the composition of the commission itself is enough to determine the responsibilities of the NDMA, saying even if the province of Punjab or Punjab Disaster Management Commission had failed to notify the Rawalpindi District Management Authority or make a district plan, the NDMA cannot absolve itself of being responsible.

“The mere fact that no meeting of the Commission was held since March, 2018 establishes the dereliction of statutory duty of NDMA,” Justice Minallah stated. Prima facie, he said, failure to implement the NDMA Act is the sole factor, which had led to the loss of precious innocent lives, including nine children.

“Further delay in implementation of the NDMA Act is likely to expose human lives to grave risk,” he maintained, noticing that “it is ironic that despite the failure of the statutory bodies created under the NDMA Act, the local population of Murree is being blamed.”

“In a nutshell,” Justice Minallah wrote, “there was a complete collapse of the statutory mechanism mandated under the NDMA Act.”