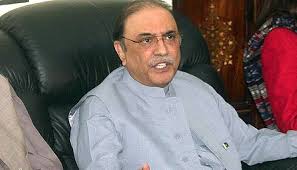 Former president Asif Ali Zardari while expressing grief at the martyrdom of five security personnel yesterday during a security operation, stated on Sunday that complete implementation of the National Action Plan (NAP) is the only solution for militants.

It is pertinent to note that during an operation at Spinwam, four Frontier Corps soldiers and one Levies sub-inspector were martyred on Saturday.

“The cure for those who challenge the state’s writ is to bring down the nurseries of terrorism,” Zardari stated.

He went on to say that terrorists must be seen as enemies of the state, while praying for the martyred security forces personnel.

It merits mention that PM Imran Khan’s statememt about the government holding disarmament talks with TTP didn’t go well with the Opposition parties. The Opposition was critical of the PM’s statement.

Pertaining to the PM’s statement, PPP has called for a parliamentary session on the matter, while calling the PM’s “extremely sensitive”.

On the other hand, PML-N’s Khwaja Asif was of a view that the PM “should have taken the nation into confidence over this matter”, considering the suffering Pakistan has gone through, at the hands of terrorists.