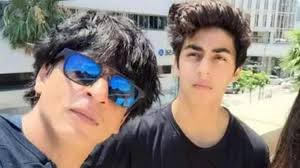 Bollywood actor Shah Rukh Khan’s 23-year-old son Aryan Khan was apprehended along with seven others on Sunday during a raid by Narcotics Control Bureau at a party on a cruise ship in Mumbai.

As per the sources, Shah Rukh Khan immediately headed for his lawyer’s office soon after the apprehension was confirmed.

According to the NCB, the high-profile raid yielded 13 grams of cocaine, 21 grams of charas, 22 pills of MDMA and 5 grams of MD.

The charges brought against Aryan Khan include purchase, possession and use of banned substances, it added.

The custody of the arrested has been given to the agency till Monday. by the court.

“Aryan had no ticket, no cabin or seat on board the cruise. He was there because he had been invited. He didn’t even have a boarding pass. Nothing has been found on him. He was arrested on the basis of chat only.”

According to the NCB officials, the party began after the ship left Mumbai and was at sea.
The raids began at 10 am and went on till 2 pm.

The agency revealed that drugs like Ecstasy, Cocaine, MD (Mephedrone) were recovered from the party on board the ship.

During the search operation, the suspects possesed different drugs which they tried hiding in their clothes, undergarments and purses, an NCB official stated.

The cruise company in a statement on Sunday said it had nothing to do with the incident.

“Cordelia Cruises is in no way, directly or indirectly, connected to this incident. Cordelia Cruises had chartered its ship for a private event to a Delhi-based event management company,” Jurgen Bailom, Chief Executive Officer and President, Waterways Leisure Tourism Pvt Ltd said in the statement.

It is pertinent to note that the Narcotics Control Bureau had been actively working to take action on anti-drugs cases since last year following the death of actor Sushant Singh Rajput and a wide-ranging investigation into alleged drug abuse.