Russian Ambassador to Pakistan H.E. Danila Ganich addressed the participants at the webinar 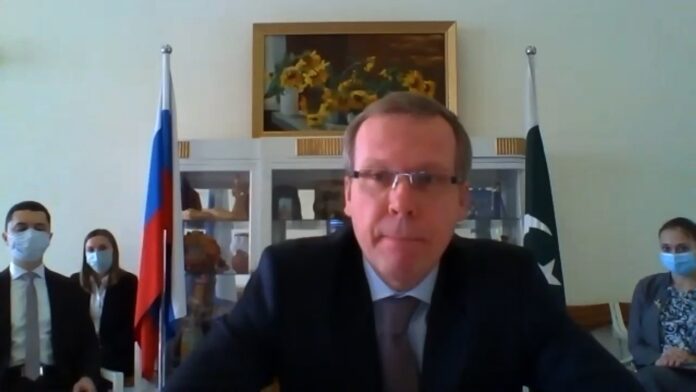 The webinar was moderated by the KCFR senior Vice chairman and Ambassador Dr Mustafa Kamal Kazi.

Russian Ambassador to Pakistan H.E. Danila Ganich addressed the participants at the webinar, which was organised in dedication to Russian Diplomats Day.

Ambassador Mustafa in his introductory remarks said that the global and regional transformation towards a multilateral order facilitates closer cooperation between Russia and Pakistan for greater good of the region.

He added that multilateralism is the solution for complex global issues.

He stressed on the importance of SCO as a platform for regional cooperation and integration, and highlighted the Belt and Road Initiative (BRI) and China–Pakistan Economic Corridor (CPEC) as components of a new global growth engine that will bring Asia, Europe and Africa closer.

He further said the relations between Russia and Pakistan have moved into a new era and would continue to grow stronger by boosting regional cooperation, progress, prosperity and stability in the region.

Ganich expressed confidence towards the positive bilateral relations between Pakistan and Russia on the basis of the consensus that has developed between both the countries. He highlighted that the two countries have common interests, including stability of the region and peace in Afghanistan, and said they can cooperate on those.

Voicing concern about the US sanctions on Iran and misjudgement by the US of Russia as only a ‘marginal’ player in the Indo-Pacific region, the ambassador expressed hopes for new opportunities and avenues of cooperation between Russia and Pakistan that the CPEC will bring. He also expressed gratitude to the organisers for the invitation to address the webinar.

KCFR Chairman Ikram Sehgal, in his concluding note, pointed out towards the CPEC and said, “The real corridor is from Russia and Central Asia down to the Arabian Gulf, which connects us to Eurasia.

He added that Pakistan is a geographical pivot and it must take advantage of its geo-strategic position while remaining neutral to avoid repeating mistakes of the past.

In the end, he conveyed gratitude to the Russian ambassador and expressed hope for continued engagement between both the countries.

ISLAMABAD: At least eight people were killed and five others injured late on Monday in a gas cylinder blast in Washuk district of Balochistan,...
Read more
KARACHI

KARACHI: The Sindh High Court on Tuesday took up a petition seeking disqualification of Chief Minister Murad Ali Shah as a member of the...
Read more
- Advertisment -