The erosion of Roe’s protections

Why did the leak happen? 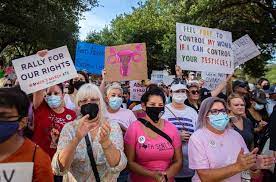 Later this week, the top Court of the USA mulled over overturning the constitutional right to abortion, and to allow individual states to regulate on the subject matter or to impose an unadulterated ban on it. I remember the time when I came across the landmark decision of the US Supreme Court in ‘Roe vs. Wade’; during my undergraduate study, a decision, one of a kind, hailed by majority of the Americans, in which the Court had ruled that the US Constitution protects a pregnant woman’s liberty to choose to have an abortion without any undue excessive government restriction. The 7-2 decision had an immense and profound effect on the lives of American women.

According to the leaked initial draft majority opinion authored by Yale Law School graduate, Justice Samuel Alito, the decision suggests that the Supreme Court has voted to strike down the landmark Roe v Wade decision, which bulldozes a full throated, unflinching repudiation of the 1973 decision guaranteeing federal constitutional protections of abortion rights and a subsequent 1992 Casey’s decision, Planned Parenthood v. Casey, that largely maintained that right. The 1992 Casey decision made two profound changes: by reducing the level of judicial scrutiny of the laws that restrict abortion, and obliterated Roe’s ‘trimester system’, which explicated the balance between the women’s right and the State’s cardinal interest in regulating the procedure so long as those regulations did not impose an undue burden.  The unprecedented revelation is bound to exacerbate the debate over what was already the most controversial case on the docket this term.

Several protesters across the USA express their vehemence on the leaked Supreme Court draft opinion that strongly suggests Roe v. Wade will soon be overturned. Opponents and proponents of abortion rights had expected that the Supreme Court would vote to overturn Roe v. Wade, but the leaked draft opinion came out as if out of the blue, setting off shock, outrage and jubilation on both sides of the nation’s deeply polarized abortion debate.

Yet many Americans woke up stunned, not realizing and some still in disbelief, that the 1973 verdict and the constitutional right to an abortion that it has guaranteed for over five decades could disappear within a matter of weeks at the behest of Conservative appointees. Students in the USA term the leaked Supreme Court’s move ‘tyrannical’.

It all emanates from the challenge before the Justices in December, when a Mississippi law banned abortion after about 15 weeks of pregnancy, well before the limit of viability necessitated by Roe. The arguments advanced by the proponents and opponents, made it abundantly clear that a majority of the Supreme Court were in favor of overturning the monument decision.

Interestingly, no draft decision in the modern history of the Court has been disclosed publicly while a case was still pending. Is it to blow the gaff to gain some public sentiment on dissent and if not, then the verdict will have the domino effect of rendering similar bans passed in over 30 states unconstitutional.

Especially in a country that stands for freedom, with the controversy when it came to masks and things like that just infringing on a human right that has to do with the body, just seems extremely hypocritical. Bodily autonomy is also momentous to the sanctity of democratic process and values. The portrait of abortion in the USA has changed with society. Today, teenagers are having far fewer abortions, and abortion patients are most likely to already be mothers. Polls have considerably shown that a majority of Americans oppose overturning Roe v. Wade. A Gallup poll in June found that 58 percent of Americans were opposed, a figure that has been relatively unchanged for three decades.

Abortion presents a profound moral issue on which Americans hold sharply conflicting views. Some belive fervently that a human person comes into being at conception and that abortion ends an innocent life. Others feel just as strongly that any regulation of abortion invades a woman’s right to control her own body and prevents women from achieving full equality. Still others in a third group think that abortion should be allowed under some but not all circumstances, and those within this group hold a variety of views about the particular restrictions that should be imposed. Perhaps, the 1973 decision not only allowed women to fully and equally participate in the society but it also helped define the contours of the right to privacy, which protects individuals from unwarranted governmental interference in private affairs.

For the first 185 years after the adoption of the US Constitution, each State was permitted to address this issue in accordance with the personal choices of its individuals. Then, in 1973, came the Roe v. Wade spectacle. Even though the Constitution makes no mention of abortion, the Court ruled that it confers a broad right to obtain one. It did not claim that US law or the common law had never recognized such a right. Eventually, in Planned Parenthood of South Eastern Pa. vs. Casey, 1992, the Court revisited Roe, but the members of the Court split three ways. Two Justices expressed no desire to change Roe theory in any way. Four others wanted to overrule the decision in its entirety. And the three remaining Justices, jointly signed the controlling opinion, took a third position. Predominantly, their opinion did not endorse Roe’s reasoning, and it even hinted that one or more of its authors might have reservations about whether the Constitution protects or guarantees such a right to abortion.

Nonetheless, the awaited opinion concluded that stare decisis, which calls for prior decisions to be followed in most instances, required adherence to what it called Roe’s, that a State may not constitutionally protect fetal life before “viability’, even if that holding was wrong. Consequently, the immediate impact of the verdict would be to end this country’s tradition of individual liberty, that is of placing the key personal and moral decisions in the hands of the government rather than the individuals, a half-century guarantee of federal constitutional protection of abortion rights, and allow each state to decide whether to restrict or ban abortion.

Interestingly, no draft decision in the modern history of the Court has been disclosed publicly while a case was still pending. Is it to blow the gaff to gain some public sentiment on dissent and if not, then the verdict will have the domino effect of rendering similar bans passed in over 30 states unconstitutional.

May 23, 2022
Pakistani literature in English seems to have received a bolster with the appearance of two recent publications in the language viz. Straggling Through Fire...