Bangladesh is profiting from China’s BRI 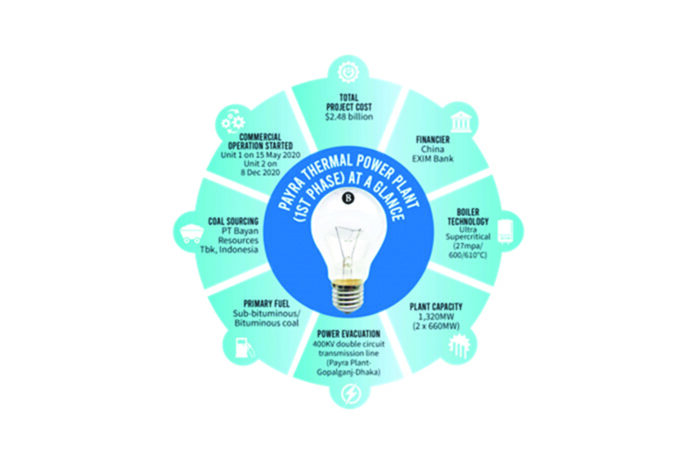 With the opening of a China-funded eco-friendly 1320mw’s mega power plant at Payra in Patuakhali district, Bangladesh became the first country in South Asia to achieve 100 percent electricity coverage. That megaproject is a centre piece of Bangladesh and China’s Belt and Road collaboration. Bangladesh saved $100 million by completing the Payra Thermal Power Plant project ahead of schedule.

Prime Minister Sheikh Hasina Wazed also expressed gratitude to the Chinese president and prime minister for their assistance in the construction of the Payra power plant. She claimed that with the inauguration of the project, every residence in the country was now getting electricity and announced 100 percent electricity coverage with the inauguration of the 1320 MW Payra Thermal Power Plant, the country’s largest of its kind.

She also remarked March was a month of Bengalese Victory, noting that her government was able to open the power plant during this month, which coincides with the “Mujib Borsho,” which commemorates the birth centenary of Bangabandhu Sheikh Mujibur Rahman and the country’s Golden Jubilee.

Chinese Ambassador to Bangladesh Li Jiming quoted on the inauguration ceremony that, “This project serves another major breakthrough in China-Bangladesh cooperation in the Belt and Road Initiative, another splendid symbol of China’s strong commitment to Bangladesh in its development.”

According to the State Minister for Power, Energy and Mineral Resources, Bangladesh has not undertaken such a large-scale, cutting-edge project in the last 50 years, and the Payra plant is Asia’s third and the world’s twelfth to use ultra-supercritical technology.

The power generation capacity has rocketed to 25,514 MW in February 2022 from 4,942 MW in January, 2009. Bangladesh is now ahead of India and Pakistan, among the South Asian countries that have brought 98 per cent and 74 per cent of their population under the electricity network, according to data from the World Bank.

Patuakhali district of Bangladesh is set to take the lead in the country’s economic growth following the opening of the country’s first coal-fired Ultra Supercritical Technology power plant in coastal Payra. Within the next 5-10 years, the area will become an energy hub.

The government is also planning to establish a special economic zone and an airport to realize its dream of developing the country, attracting investments to Payra, and establishing besides Kuakata as a world-class eco-tourism centre within the next two decades, according to State Minister for Power Nasrul Hamid, while this power plant will ensure power coverage of this flagship dreams.

The plant will energize Payra port, which has the potential to become an important sea-based transit point on the Silk Route as well as a global trade hub, as the government plans to develop the region as one of the country’s major economic corridors by establishing direct road and rail connections between Dhaka and the rest of the country, as well as connectivity to Bhutan, China, India, and Sri Lanka. According to the port authorities, a full-scale functioning of the port will result in a two-percent boost in the country’s gross domestic product (GDP).

Another active power project, The Barapukuria Coal Fired Power Plant Extension is a 275MW coal-fired power plant in Rangpur, Bangladesh is also developed by CCC Engineering and Harbin Electric. Bangladesh received a $224 million loan from the Chinese private bank Industrial and Commercial Bank of China (ICBC) in January 2014 to expand the capacity of the 250 MW Barapukuria coal-fired thermal power station by 275 MW.

China’s SEPCOIII Electric Power Construction Corporation has also committed to collaborate with Bangladesh’s S.Alam Group to build coal-fired power facilities in Chittagong with a capacity of 1320 MW, which are targeted to begin operations this year.

Bangladesh joined the flagship BRI in 2016, and its ties with Beijing have grown significantly in recent years, as Bangladesh’s largest trading partner is now China. During Chinese President Xi Jinping’s visit to Dhaka in October 2016 different development projects worth around $20 billion were agreed.

Among which The Padma Bridge Rail Link, the Karnaphuli Tunnel, the Single Point Mooring project and the Dasherkandhi Sewage Water Treatment Plant are all slated to be finished this year. All of these China-funded projects are expected to make a significant contribution to Bangladesh’s economic growth in order to meet the country’s goal of becoming a developed country by 2041.

Saifan Shakhaoat
The writer can be contacted at [email protected]