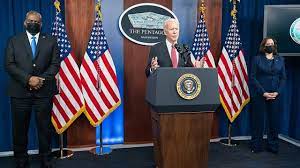 Recently US President Joe Biden issued an executive order of unfreezing of $7 billion of Afghan Central Bank funds held in the USA, releasing $3.5 billion for humanitarian and other aid in Afghanistan, with an equivalent amount set aside for relatives of those killed in the 9/11 attacks who have legal claims against the Taliban.

Ostensibly, the Biden Administration has launched a procedure to take the Central Bank of Afghanistan’s assets on deposit at the Federal Reserve Bank of New York, in a move that can only be defined as outrageously unethical and absolutely repugnant.

That money has been frozen since the Taliban took control of the war-torn country last year. Now, the Administration took custody of money that they didn’t own in the first place, intending to use half of it for humanitarian aid in Afghanistan and the other half for families of 9/11 victims who have filed claims against the Taliban for the 2001 terrorist attacks. That too in a situation where Afghanistan’s economy is on the verge of crumbling, and inflation is skyrocketing, putting millions of Afghans starving.

To begin with, why is it logical that regular Afghan civilians who had nothing to do with the September 11 attacks have their funds seized and their lives jeopardized by Washington bureaucrats? (Afghan assets at the Central Bank are said to be made up of foreign exchange money, commercial bank reserves, and ordinary people’s savings, according to reports.) We can all agree that no one elected the Taliban into power in 1996, without revisiting the subject of how the Taliban came to be in the first place. Why should the Afghan people be held accountable for the activities of that group? No one from Afghanistan was among the 19 hijackers who carried out the September 11 attacks.

The fact is that the Taliban and Al-Qaeda have disproportionately targeted the Afghan people, and using Afghan funds to compensate bereaved Americans in order to punish the Taliban is tantamount to collective punishment.

There has to be a better way, and suggestions are being developed that would allow the Afghan Central Bank’s actions to be overseen by independent auditors to ensure that none of the money is seized by the Taliban. This executive order is cruelty and thievery disguised as charity and justice, and it must be rescinded before irreversible damage is done.

And why does this type of financial hostage-taking in the first world only go in one direction? After all, don’t the USA, Pakistan, Saudi Arabia, Russia, the United Kingdom, and a slew of other countries share some of the blame for Afghanistan’s tens of thousands of civilian deaths? The money offered in condolence payments by coalition forces is little in comparison to the devastation they have wreaked. Shouldn’t we seek recompense for the Afghan victims of allied brutality if we determine that the September 11 families deserve justice for their losses, as they do?

Nonetheless, the notion that Afghans may seek legal methods to flee the US Treasury because of their people’s deaths and the USA’s participation in the country’s devastation is absurd. This terrible disparity exemplifies international politics’ continuing colonial character. Whatever legal squabbling over lawsuits and default judgments this presidential order is allegedly intended to solve, the message it communicates is clear: American lives are more important than Afghan lives, and American sorrow looms larger than Afghan grief.

However, the suffering continues. Afghanistan has suffered 40 years of deadly turbulence, beginning with the USA and the USSR conscripting Afghans into their global fight and thrusting ordinary people into one of the hottest zones of the cold war. (The 40th anniversary of Ronald Reagan’s proclamation of 21 March 1982 as Afghanistan Day approaches.) Following 9/11, Afghans were subjected to systematic torture by Americans at Bagram Airbase, as well as brutal American drone assaults, homicidal night raids, and other atrocities.

No doubt, the Taliban have a large share of the blame for their tremendous violence and harsh repression, and assisting them in regaining power would be devastating. However, taking Afghanistan’s money and dispersing it as you see fit is hardly in the interests of justice. It’s incredible that anyone, much alone the US Administration, believes it’s possible.

On the contrary, the people of Afghanistan are today experiencing a massive economic catastrophe. Since the Taliban gained control last year, the nation has been in disarray due to a lengthy drought, the effects of the virus, and the halting of western help. At least 95 percent of households in the country are unable to feed themselves adequately. One million Afghan youngsters are very malnourished. Malnutrition affects over three million people. In a country where four million people had already been internally displaced, last year’s war uprooted nearly three-quarters of a million people from their homes.

According to the government, this executive action will free up cash that will be distributed as help right away. But, in practice, the administration’s alchemy of converting other people’s money into humanitarian aid is likewise misguided. The action will further impoverish the country, pushing it closer to being a region virtually totally reliant on foreign aid.

While urgent relief and aid are needed, Afghanistan’s long-term requirements include a functional economy, which is becoming increasingly impossible as the US effectively bankrupts the Afghan Central Bank. As a result, Biden’s executive action jeopardizes the future of economic development and stability. Without a central bank and a functioning trade system, the national economy simply cannot function.

There has to be a better way, and suggestions are being developed that would allow the Afghan Central Bank’s actions to be overseen by independent auditors to ensure that none of the money is seized by the Taliban. This executive order is cruelty and thievery disguised as charity and justice, and it must be rescinded before irreversible damage is done.