50 Years of Bangladesh and Its declining political stature 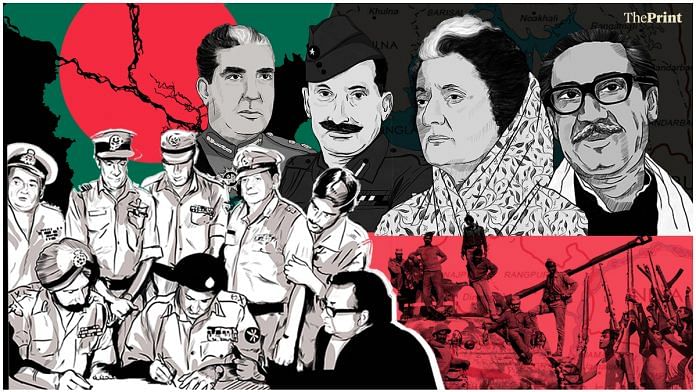 Bangladesh has marked the Golden Jubilee of its birth. 50 years of partition from the western wing of Pakistan means a lot of time where things would have changed for good but is Bangladesh headed in the right direction – politically? We have all been in praise of Bangladesh’s economic rise but politically, there is so much of it that gets ignored under the massive censorship imposed by Shiekh Hasina Wajid who is ruling Bangladesh for more than a decade now.

Democratic values of once socially diverse and politically rich Bangladesh are fading under that authoritarianism. People of Bengal have historically been very conscious and have stood up for their rights in different times. Among them were the famous leaders of Pakistan Movement who led the movement with great passion and devotion. However, over the years Bangladesh has started to turn up into a one-party state, where dissent means putting your life in danger.

Any kind of dissent from the state’s narrative in Bangladesh on the events from March to December 1971 are not just unendurable but subjected to severe repercussions; if anyone dares to take that step. Recalling an incident from 2014, a British Journalist David Bergman was punished in a contempt of court case for questioning Bangladesh’s notorious International Crimes Tribunal (ICT) about the trials conducted on the 1971 war. ICT has been sentencing voices of political dissent under the guise of ‘betrayal in 1971’ which was condemned by different International Human Rights Organizations including Amnesty International, United Nations and Human Rights Watch

Bergman in his blog writes; “It is a common trope in Bangladesh for the government to allege that those they consider its critics to be “Jamaat supporters”, “against the liberation war”, and are “haters of Awami League” – all of which have been levelled against me.” Bergman is a son-in-law of prominent political figure of Bangladesh, Dr. Kamal Hossain, who is renowned as the father of Bangladesh’s Constitution. If someone with such prominent linkages can be subjected to such draconian measures, imagine the magnitude of plight that a normal dissenter goes through in showing any kind of political dissent.

In 2019, famous Indian author and Booker Prize Winner Arundhati Roy was barred from entering Bangladesh for the second time, where she was supposed to speak in Chobi Mela with participation from 21 countries from across the world. After the initial nod, organizers of Chobi Mela were informed that Roy cannot participate in the event due to ‘unavoidable circumstances’. Arundhati Roy, quite evidently has been vocal for atrocities and human rights violations across the world but what irked Bangladesh was rather insane – her 2011 video in which she claimed that Pakistan Army was never used against its own people. Her statement was criticized in Bangladesh and ever since she has faced hostile treatment from the Government of Bangladesh. Arundhati Roy later clarified her stance but that did not end her censorship in Bangladesh.

In Bangladesh, one political party, the Jamaat e Islami, faces complete ban with all its factions including the student wing, on bizarre charges of its charter being not in line with Bangladesh’s constitution, just because it puts Islamic values first. While in complete contrast to that, Chhatra League, the student wing of the ruling Awami League, acts as a vigilante mob persecuting anyone who disagrees with them and their leader Sheikh Hasina.

What followed next was brutal and insane. Members of Chhatra League were unleashed onto him, not one or two but 25 of them, who murdered Fahad in his hostel dorm. Recently, 20 of them were given death sentence by the lower court of Bangladesh but independent observers doubt if the justice would be served because Bangladesh has a history of Presidential pardon given to highly accused murderers, especially in political cases.

Biharis in Bangladesh are still living in constant fear of persecution, not so different from India where they are being deprived of their very basic rights by getting their citizenship revoked in the aftermath of National Register of Citizens (NRC). From the Bihari massacre of 1971 to the unfortunate Kalshi clashes of 2014, Bihari community still long for justice in Bangladesh where the Law Enforcement Agencies (LEAs) are among the major human rights violators. Former Chairman of Bangladesh’s National Human Rights Commission (NHRC) Mizanur Rehman confirmed that 90% complaints of human rights violations that they received were against different law enforcement agencies including Bangladesh’s elite, RAB (rapid action battalion). Will the trial court of Bangladesh put these and other cases of Bihari persecution from 1971 into trial as well? Or the court is just staged up to follow a one-sided agenda?

On the 50th Victory Day Celebrations in Bangladesh, one thing which outshone everything else was the overwhelming presence of Indian dignitaries stamping their illegal intervention in 1971 and the events that preceded that. Over the years, in Hasina’s regime Bangladesh has tilted a lot towards one particular neighbuor, which to their bad luck surrounds them from three sides. This inclination is partially because of her own political bias and partially because of the continuous bullying that it faces from India is leaving them with very little choice.

It is now up to the people of Bangladesh, especially the diaspora to see and question if Bangladesh is gradually being left with no other friends internationally? Is this the liberty that they longed for– a state where a certain lot is unquestionable and political dissent is becoming costlier with each passing day.

The incumbent authoritarianism is becoming a threat to Bangladesh’s multiplicity, which used to be its identity and pride worldwide. The people of Bangladesh will have to do an internal reflection and take a leap, before the prevalent suppression eats up their society internally.

Aadersh Hamza
The writer is a Research Officer on the Balochistan Think Tank Network, Quetta