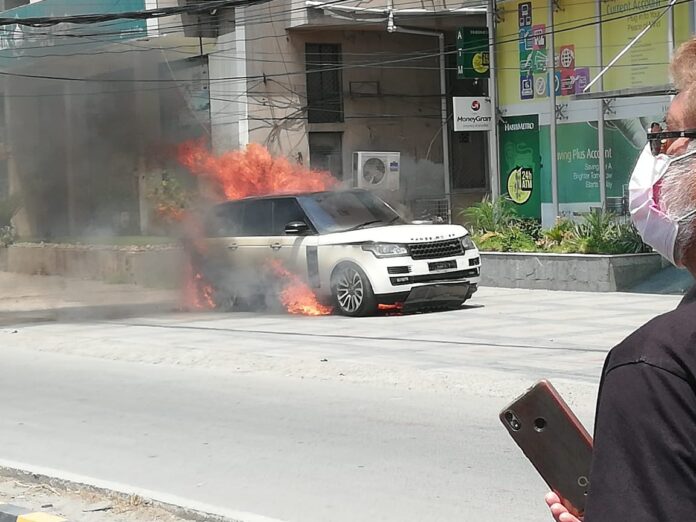 LAHORE: Lahore police has registered a case against Hamza Javed, a citizen who deliberately crushed a policeman under his vehicle, while the accused has also been arrested, Pakistan Today has learnt.

According to details, Javed was also trying to get a room in Avari Hotel by posing himself as a senior officer of a sensitive agency.

However, according to the FIR received by Pakistan Today, a case was registered against Hamza Javed at the instigation of Munawar Khan, head constable, Civil Lines Police Station, in which he stated that he (Munawar Khan) along with his fellow Constable Ashiq Ali had gone to Governor House. While patrolling the area, he was informed that Javed was demanding a room from the hotel manager at the Avari Hotel near the Governor’s House, posing himself as a senior official of a sensitive agency.

However, Khan added that the situation became suspicious when Javed was asked if he was really a senior official of a sensitive agency. When Khan asked Javed for details, the latter said that he was a resident of Faisalabad. However, Khan found the situation suspicious and controlled Javed with his companion and took him to the police station along with his Range Rover numbered MH1.

According to Khan, his accomplice was coming along with his motorbike and as soon as the vehicle reached the Civil Lines Police Station, Javed grabbed an iron rod from inside the vehicle and threatened to kill Khan.

According to Khan, he had been abducted and Javed drove away at high speed and threatened Khan to stay with him. Khan further said in the FIR that as soon as the vehicle approached the Muslim Town underpass, Hamza deliberately asked Khan to get off first on the left side and then on the right side of the canal and as soon as Khan got down, Javed reversed the car and climbed on Khan and tried to kill him.

However, Javed had crushed Khan under the vehicle, as a result of which Khan’s right leg was broken from the shin and the accused had fled the scene with his vehicle. Meanwhile, Khan’s accompanying constable Ashiq Ali, who was in pursuit of the vehicle, had reached the spot and rescued Khan and rushed him to the Services Hospital in a critical condition. The police has registered the FIR under sections 324, 365, 506, 279 and 170.

Javed later tried to flee the scene and reached near Barkat Market, according to the police, a motorbike was stuck under his vehicle and due to a petrol leak from bike, the vehicle caught fire and the vehicle was completely burnt to ashes. On this occasion, the police arrested Javed.

The CCTV footage of the whole incident went also viral on social media.