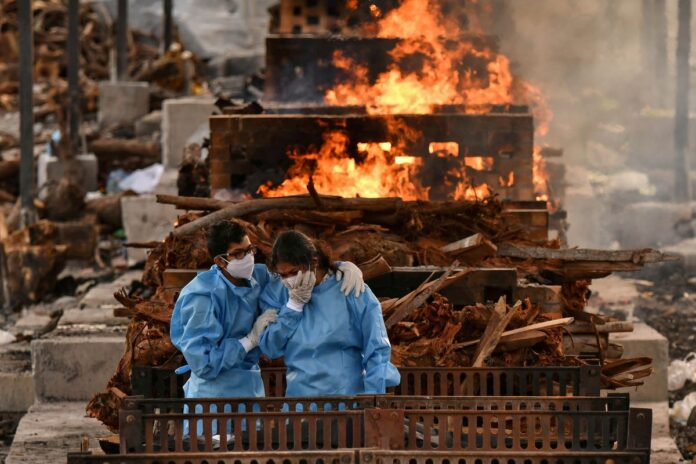 NEW DELHI: Ashok Khondare, a 39-year-old vegetable seller in the western Indian city of Pune, had already borrowed money to pay for his sister’s treatment when she died in a private hospital two weeks after contacting Covid-19.

While trying to overcome the tragedy, he also had to deal with money problems that increased with his sister’s death.

The only available hearse driver charged Rs5,000 ($68) for a 6-km (four-mile) journey to the nearest crematorium — five times the going rate. When Khondare reached there, there was a long queue of dead bodies and waits of more than a day. He agreed to pay another Rs7,000 to jump the queue.

“I had been experiencing a terrible situation for a fortnight,” he said. “I couldn’t sleep or eat properly. I wanted to end this as early as possible and didn’t mind paying an irrational amount.”

India’s second wave of coronavirus has not only created shortages of oxygen, medicines and hospital beds, but also of wood for funeral pyres, hearses, and crematorium slots, forcing people like Khondare to pay exorbitant amounts to perform the last rites of loved ones.

India is reporting by far the highest number of new daily cases globally, and over 4,000 deaths per day — figures that are almost certainly under-reported, according to experts.

India’s Hindu majority cremates its dead, and the huge numbers of deaths are creating backlogs at cremation grounds and shortages of manpower and raw materials.

“There is a huge demand for firewood used for funeral pyres at crematoria, but supplies are not sufficient,” said Rohit Pardeshi, a firewood merchant in Satara, a city in the western Indian state of Maharashtra.

Due to a local lockdown designed to curb the pandemic, there is a shortage of people to cut trees and those workers who are available are asking for higher wages.

“This has created a shortage of firewood and lifted prices,” Pardeshi said.

Retail prices for firewood are up by at least 30 percent, and have more than doubled in some areas, said a second firewood seller in the same city.

In the north Indian state of Uttar Pradesh, 24-year-old Mukul Chaudhary faced similar problems after his mother died in the state capital Lucknow.

The ambulance driver who dropped his mother off at the hospital for Rs5,000 charged even more to take her body to the crematorium.

“We had to beg him not to overcharge us further,” Chaudhary said.

Firewood for the cremation cost double the normal rate, while the priest who performed the last rites charged the family Rs5,000 — two to five times the usual amount.

Rohit Jangam, a Hindu priest in Satara, said many priests there were refusing to enter crematoriums out of fear, and those who were willing were charging higher prices.

“It is too risky to perform the last rites of those died because of coronavirus,” he said. “If someone asks, I do, but I charge more since I am taking the risk.”

He declined to disclose how much more he was charging.

For Covid-19 patients who manage to survive, black marketing of medical supplies is rampant, with desperate relatives paying huge sums in what is still a low-income country.

In the capital New Delhi, oxygen cylinders have changed hands for as much as Rs70,000, according to interviews with relatives – twenty times the usual price and many times the monthly salary of the average Indian.

Police there have made more than 100 arrests in cases connected with overcharging, including for drugs, ambulance services and hospital beds.

Arveena Sharma, a 28-year-old lawyer from Noida, a satellite city of New Delhi, has helped more than a dozen Covid-19 patients who are friends and relatives get oxygen and medical supplies in the last month. Almost all of them have overpaid significantly.

“They’re like vultures,” she said of those selling black market drugs.

“You are standing in front of me with something which might save me and you’re looking at my pocket.”