A spokesperson of Bilawal House said that a Milad function will be held on January 24 at the residence of the PPP leader with a simple Mehndi ceremony scheduled to take place on January 27. 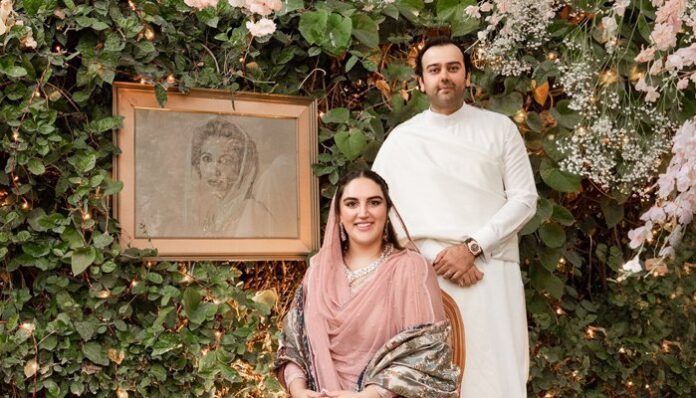 KARACHI: The details of the upcoming wedding of former president Asif Ali Zardari’s daughter Bakhtawar Bhutto Zardari with Mahmood Chaudhry have been unveiled by the Bilawal House on Friday

A spokesperson of Bilawal House said that a Milad function will be held on January 24 at the residence of the Pakistan People’s Party (PPP) leader with a simple Mehndi ceremony scheduled to take place on January 27.

The Nikkah of Bakhtawar Bhutto will be held on January 29 while the Barat is scheduled for January 30.

The spokesman said that PPP Chairman Bilawal Bhutto Zardari will be suspending his political activities for a week to participate in sister’s wedding.

The Bilawal House also said that close to 1,000 guests have been invited to the wedding. The statement added that the invitations have also been sent to the important political leaders of the country including military leaders and judicial heads.

Bakhtawar got engaged to Mahmood Choudhary on November 27, 2020, in an intimate ceremony held at the Bilawal House Karachi. A limited number of people — including the city’s bigwigs, business magnates, politicians, and lawyers — were invited to the event.

Her brother, Bilawal, was unable to physically participate due to being quarantined after testing positive for the coronavirus. He was present through video call and later successfully recovered from Covid-19.

According to the PPP’s media cell, Dubai-based Choudhary is the son of Mohammad Younas Choudhary and Begum Suriya Choudhary and manages a diversified business. The family hails “from the old town of Lahore, Pakistan.”

“Mr Younas migrated to the United Arab Emirates (UAE) in 1973, where he established businesses in the construction and transport industry,” a statement issued by the PPP earlier read.

As Senate elections near, the political temperature is rising by the day with all major political parties fiercely campaigning to ensure that their respective...
Read more
KARACHI

Sindh Minister for Information and Local Government Syed Nasir Hussain Shah has said that the federal government has resorted to cheap tactics after some...
Read more
HEADLINES

PTI calls for removal of Imran Ismail for ‘poor strategy’

Members of the ruling party have called for the removal of Sindh Governor Imran Ismail as he allegedly did not consult stakeholders for the...
Read more
HEADLINES

PPP will be the largest party in Senate, says Zardari

Daska by-polls had ‘lifted the curtain from many secrets’, says Nawaz

ISLAMABAD: The coronavirus pandemic has claimed 12,804 lives and infected 577,482 people in the country during the last one year as Pakistan’s fight against coronavirus...
Read more
- Advertisment -