Govt ready for dialogue with Opp except for accountability process: FM Qureshi 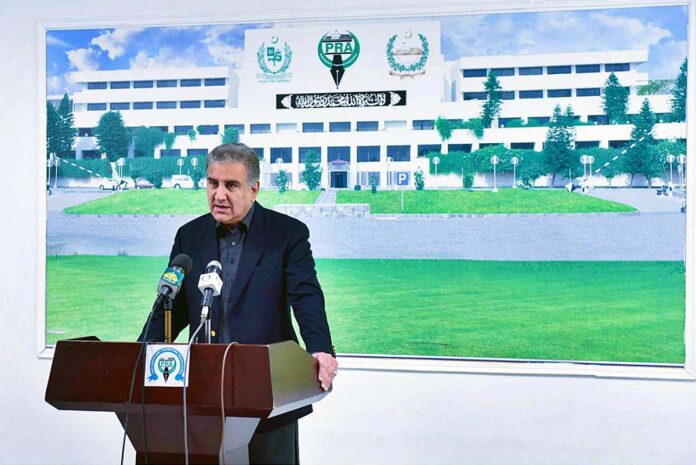 ISLAMABAD: Foreign Minister Shah Mahmood Qureshi on Friday again asked the opposition parties’ alliance to come for dialogue with government on the forum of the Parliament, but told them to set aside their agenda of escaping accountability.

Talking to media at the Parliament House, he said that there would be nothing constructive happened in today’s meeting of Pakistan Democratic Movement (PDM) at Jati Umra, adding that Pakistan People’s Party (PPP) was being represented by Raja Parvez Ashraf and former premier Yousaf Raza Gilani, who had not been in favour of resignations from assemblies in the past.

He further said that both were respected senior politicians but they did not have the authority to take any decision.

He said that real decision power in the PPP was with its Co-chairperson Asif Ali Zardari.

Qureshi said that in spite of the PDM leadership holding a meeting in Lahore today, the differences among the constituent parties of the alliance had already come forth.

He said that the PPP Central Executive Committee (CEC) has decided that the party will take part in the upcoming by-elections and the Senate elections.

He added that PPP CEC also decided that it will not tender resignations from assemblies. He further said that PPP has yet to announce any date for the previously-threatened long march.

Qureshi said that the PDM had earlier decided that their parliamentarians would submit their resignations to PDM President Maulana Fazal Rehman by December 31, but PPP Chairman Bilawal Bhutto-Zardari opposed it, arguing that the resignations should instead be submitted to the heads of the parties.

Qureshi said that this was proof of the lack of confidence within the alliance. He took a jibe at the alliance, saying that they had now given a new deadline of January 31, 2021, and that the new deadline would come and go like the previous one.

He said that PPP’s majority leadership was against resignations from the assemblies and they were not ready to quit from Sindh government.

He categorically stated that Prime Minister Imran Khan would not resign at all as he was the people’s elected leader.

He questioned why Bilawal decided to skip today’s PDM meeting if it was so important to their future course of action. The FM said that the nation can clearly see the reality.

He said that the opposition alliance was unnatural and they need to stop playing games with the nation. He stated that the PDM parties had clear and serious differences and did not agree with each other’s viewpoints.

Qureshi said that the PDM is still attempting to obtain an NRO as a way of escape from the accountability process. He said that opposition was exposed during the Financial Action Task Force (FATF) legislation meeting, adding that they demanded 34 amendments.

The minister said that PM Imran was not at all willing to provide an NRO as the Pakistan Tehreek-e-Insaf (PTI) government was in favour of a transparent accountability process.

He said that voices had been raised from within Jamiat Ulema-e-Islam-Fazl (JUI-F) against the narrative of its chief, adding that his senior friends in the party showed reservations against Fazl’s plans.

Condemning the incident of burning of a Hindu shrine by a mob in Karak, the foreign minister said that the chief justice of Pakistan (CJP) has taken notice of the attack. He further said that it was an irresponsible act and an attempt to damage Pakistan’s image at the international level.

Replying a question, he said that Pakistan’s position on the Kashmir and Palestine issues was very clear, adding that the stance of Quaid-e-Azam Muhammad Ali Jinnah on these issues had been and will continue to be a guiding principle for the PTI.