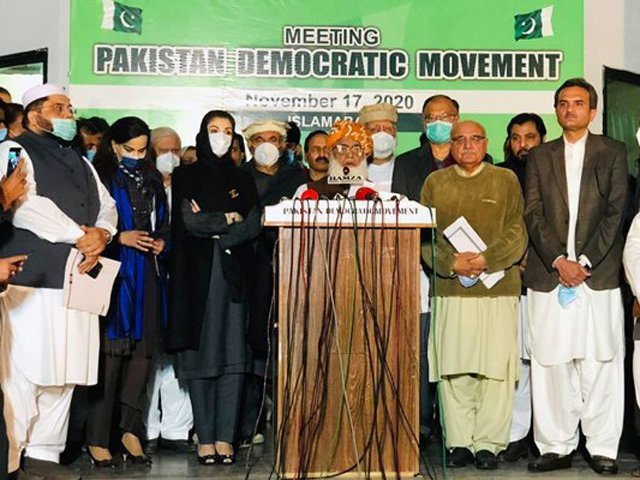 Pakistan Democratic Movement (PDM) President Maulana Fazlur Rehman has said that the alliance will take part in the upcoming by-polls, adding that rumours about conflicts within the party are false and that the PDM is stronger than ever.

Fazl said the above while addressing the media after the 11-party anti-government alliance met at the Sharif family estate in Jati Umra in Lahore on Friday to discuss their future strategy.

“We will take part in by-polls and will decide about the Senate elections later… basically we are not against taking part in elections,” PDM chief said. He also reiterated that the incumbent government has only one month left to resign or the PDM will begin its long march.

“We will decide whether to hold long march towards Rawalpindi or Islamabad,” he said, adding that the date and venue will be announced soon.

“Imran Khan is a pawn for [and] the people who did rigging and imposed him upon the nation, we want to make it clear [to them that] we blame the establishment and army leadership for this,” said Fazl, stating that the PDM was determined to get rid of this “illegitimate” government.

Fazl added that from now the alliance would criticise both Prime Minister Imran Khan and the establishment, accusing it of meddling in political affairs and installing the “puppet government” into power.

He also announced that PDM will hold protests outside the Election Commission of Pakistan (ECP) and National Accountability Bureau (NAB) offices across the country.

Regarding the resignations from legislative assemblies, Fazl said that the final decision in this regard will be taken by the end of this month.

Speaking on the topic of resignations, Pakistan Muslim League-Nawaz (PML-N) Vice President Maryam Nawaz Sharif said that her party members have already submitted their resignations to her.

Similarly, Fazl said that the constituent parties of the PDM confirmed during the meeting that they have collected resignations from all of their parliamentarians.

Earlier in the day, the PDM huddled to finalise its course of action. This meeting was particularly significant as the Pakistan People’s Party (PPP) had earlier announced that it would take part in the Senate elections and by-polls, while the Jamiat Ulema-e-Islam-Fazl (JUI-F) and the PML-N leaned towards abandoning the parliament and taking to the streets against the government.

“It seems that the PPP has been successful in convincing its major allies to continue consultation for contesting Senate elections,” sources in the PDM told Pakistan Today.

Sources suggest that a major group of the Pakistan Muslim League-Nawaz (PML-N) is lobbying to convince the party leadership to follow the suite and contest Senate elections rather than resigning from the assemblies and leaving ground open for the ruling party – Pakistan Tehreek-e-Insaf (PTI).

They said that it is a major challenge to the PML-N VP who is in a fix.

“It is a possility that Maryam Nawaz may not agree to Bilawal’s proposal to fight the PTI in the assemblies. But even if Maryam Nawaz agrees to PPP’s decision, it would be a gigantic task to convince Maulana Fazlur Rehman to go along with it. In any case, the PDMs fate is in a jeopardy as the PPP, PML-N and JUI-F may not agree to the PPPs decision,” sources said.

“Sources said that after PPP’s decision to contest Senate elections, a new test has started for the PML-N vice president as to whether go for the long march by resigning from assemblies or fight the PTI in assemblies,” the sources said.

They said that Maryam had taken a position against contesting the Senate election and resigning from the Assemblies along with Fazl who stands rock solid on his stance.

“The PML-N leaders have started consultations. Today’s meeting of PDM was important in this regard in which decisions regarding resignations, Senate elections and by-polls were to be taken. But it could not take any decision on the Senate elections,” sources said.

According to PPP leaders, members of the Central Executive Committee (CEC) have accepted the proposal to resign from the assemblies, but this is the last option, and they are in favor of contesting the Senate elections so that the PTI does not get a two-thirds majority in the Senate.

According to sources, some PML-N leaders are endorsing the PPP’s stance and they have also convinced Fazl and PML-N leaders to contest the upcoming by-elections.

Sources said that the PPP members agreed on the decision that its lawmakers should submit their resignations to the leadership but do not agree to hand over the same to PDM President Fazl.

“In view of the situation, it is expected that the PDM will launch a protest movement against the government as well as contest the Senate and by-elections and formulate a strategy for the long march, sit-in and resignation option after the Senate election. There are possibilities, ” sources added.

After a late-night meeting between PML-N Vice President Maryam and PDM President Fazl earlier this week, the two senior politicians had said they wanted to give PPP Chairman Bilawal Bhutto-Zardari a chance to explain his viewpoint regarding the decision to enter PPP into the elections.

PML-N supreme leader Nawaz Sharif reportedly also participated in the aforementioned meeting via a video-link from London to discuss various options in the wake of the PPP’s reluctance over the proposed en masse resignations as part of their anti-government campaign.

The remarks had come on the backdrop of a PPP Central Executive Committee (CEC) meeting held on Tuesday following which speculation was rife that legal experts have advised party heads against untimely resignations from the national and provincial assemblies.

However, Bilawal had earlier said that all decisions made regarding the PDM would be a result of consensus and that nothing final has been announced regarding the resignations, which pleased Maryam and Fazl.

The PPP chairman, in a press conference after the CEC meeting, had also stated that the CEC believed “that if we (joint opposition) take up the challenge of Senate elections collectively we can make a better impact and achieve larger success.”