What the FBI investigation means for the US/Israel relationship

The shooting to journalist Shireen Abu Aqla refuses to go away 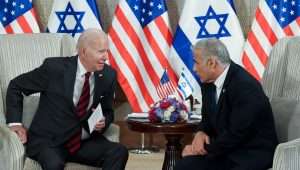 By itself, the announcement that the FBI will conduct an independent investigation into the murder of Palestinian American journalist Shireen Abu Aqla is not, as one Israeli journalist said, a “watershed moment” in the US-Israel relationship. But because of the factors that led to this decision and the tensions that will flow from it, it’s clear that there are changes underway in US attitudes toward Israel and its behaviour.

It will be recalled that immediately after Abu Aqla was killed, the Israeli hasbara machinery swung into full gear doing what they always do to escape blame— a combination of denying, lying, and obfuscating— hoping to buy enough time until the issue faded from the headlines and was forgotten.  They said:

“We don’t think we killed her.”

“Palestinian terrorists, firing indiscriminately, are likely to have hit her.”

“Our forces…returned fire as accurately, carefully, and responsibly as possible. Sadly…she was killed in the exchange.”

“They were armed with cameras.”

“By not cooperating with us…perhaps Palestinians are covering up the truth.”

In too many instances in the past, such an intense campaign of dissembling might have worked. But this was different for several reasons: Shireen Abu Aqla was a respected journalist; she was an American citizen; there was ample video footage of the shooting; and reflecting the changes that have been developing in US public opinion, some members of Congress were emboldened to demand an independent investigation of Abu Aqla’s death.

Given the intense media reaction to the killing of Saudi journalist, Jamal Khashoggi, there has been a heightened US media sensitivity to the protection of journalists— even more so in this case, because Abu Aqla was a US citizen with family members who eloquently pressed US officials for support.

Further amplifying this growing divide is the election of a hard right government, led by Benjamin Netanyahu and including racist, ultranationalist, and ultra-Orthodox religious political parties that are demanding top security posts in the next government. Democrats have warned Netanyahu about the dangers of bringing these elements into his cabinet (warnings that he is likely to ignore). On the other hand, given the prominent role played by Christian Nationalists in today’s GOP, Republicans have either been silent or supportive of a Netanyahu government.

Major news outlets, including CNN, Associated Press, The Washington Post, and The New York Times, conducted investigations of their own, interviewing witnesses, reviewing video footage, and surveying the scene. Their findings, in every instance, found Israel’s claims to be false.

Most importantly, within days after Abu Aqla’s killing, one-quarter of the Democratic members of the House of Representatives sent a letter to the Secretary of State and the Director of the FBI calling for an independent investigation of the shooting. Their demand was joined a few weeks later in a letter to President Joseph Biden signed by one-half of the Democrats in the US Senate.

Then, following the release of an inconclusive forensic analysis of the bullet that killed Abu Aqla, which the Israelis hoped would lay the matter to rest, four leading Democratic senators sent a sharp response to the Secretary of State decrying the report as inadequate, lacking in transparency, and in no way “meeting any plausible definition of…(an) ‘independent, thorough, and transparent investigation.” The bulk of the letter comprised 13 probing questions that needed to be answered to satisfy their demand for a full investigation. Now, four months later, the FBI has responded that they will conduct such an inquiry.

The congressional sponsors of the letter expressed satisfaction with the prospect of an FBI investigation, with one senator calling it “an overdue but necessary and important step in the pursuit of justice and accountability.”

Israel’s reaction, on the other hand, was predictable outrage. Defense Minister Benny Gantz called the FBI announcement a “grave mistake,” pledging that they “will not cooperate.” Outgoing Prime Minister Yair Lapid amplified this rejection, saying “Israeli soldiers won’t be investigated by the FBI.”

With battle lines drawn, the White House and State Department sought to distance themselves from the fray, claiming that they were unaware of the FBI decision. It is unlikely that they were not informed and, now that it has been announced, it is even more unlikely that it can be aborted without further alienating important leaders in the US Senate and generating an intense political backlash in Congress and public opinion.

It’s this final point that must be considered, as this entire tug of war is playing out against a backdrop of several other factors that illuminate the unfolding tensions in the US/Israel relationship. There is a deepening partisan divide on the question of holding Israel accountable for its human rights violations. Polls show that Democrats are solidly in favor of holding Israel accountable, while Republicans are not. As an example, on hearing the news of the FBI investigation, Republican Senator Ted Cruz called for Attorney General Merritt Garland to be impeached.

Further amplifying this growing divide is the election of a hard right government, led by Benjamin Netanyahu and including racist, ultranationalist, and ultra-Orthodox religious political parties that are demanding top security posts in the next government. Democrats have warned Netanyahu about the dangers of bringing these elements into his cabinet (warnings that he is likely to ignore). On the other hand, given the prominent role played by Christian Nationalists in today’s GOP, Republicans have either been silent or supportive of a Netanyahu government.

And finally, there’s the role played by the pro-Israel lobby AIPAC in the last election. Their dark money political action committee endorsed over 100 Republican “election deniers” and spent tens of millions to oppose progressive Democrats—especially targeting women of color and liberal Jewish members of Congress who were deemed insufficiently supportive of Israel. All of these factors combined are contributing to a further erosion of the once bipartisan support for Israel in Congress.

While there’s no certainty that the FBI will be allowed to carry out its independent investigation, the fact that it was announced and the forces at work in today’s American polity make clear that there are changes afoot in the US/Israel relationship. It is not yet a “watershed moment,” but it’s heading in that direction.