Pakistan should not have to pay for other’s profligacy 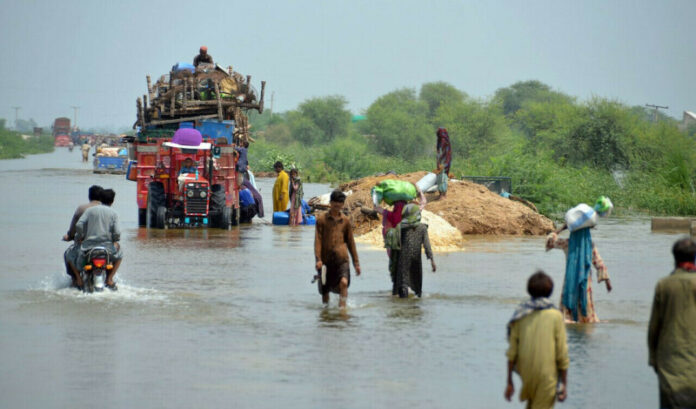 It has been around two months into the catastrophic floods that hit one-third of Pakistan, displaced around 33 million people, killed around 1500, one-third among them being children, in addition to loss to property, crops, and livestock. Initial estimates indicate flood-caused damage at an alarming level of around $30 billion.

While the damage caused by flood could have been restrained somewhat by better gross capital formation towards putting in place better water management infrastructure. Having said that, exceedingly high torrential rains, and glacier melting at increasing rates at the back of fast unfolding of the climate change crisis, towards which Pakistan’s contribution in terms of carbon footprint is reportedly around 0.8 percent globally, but the country is among the top ten globally to be the most vulnerable in the face of climate change crisis.

To understand the causes and extent of torrential rains, a recent Financial Times (FT) published article ‘Climate change intensified Pakistan’s rains up to 50%, report indicates’ pointed out ‘Climate change is estimated to have made the rainfall that caused devastating flooding in Pakistan up to 50 percent more intense, according to a scientific paper published just days before the issue of environmental reparations is expected to be raised at the UN general assembly.The conclusions of a rapid study of the disaster in Pakistan by 26 scientists from nine countries, as part of the World Weather Attribution group, said computer models indicated rain over a five-day stretch in southern Pakistan was significantly more intense than it would have been without a rise in global temperatures of at least 1.1°C since pre-industrial times.’

Hence, more than favour, it is the responsibility of the international community to provide needed financial assistance to Pakistan as climate justice, especially by those rich countries, which have a significant level of carbon footprint. Yet, little international financial assistance has materialised up till now, while water-borne diseases are becoming rampant, as a significant number of people are becoming exceedingly vulnerable, and are being pushed below the poverty line. Having said that , lack of international support up till now, is in addition to the insignificant level of commitment shown by rich countries on their $100 billion annual release of climate finance for developing countries.

In this regard, while on his visit to attend the 77th United National General Assembly (UNGA) session, PM Shahbaz Sharif gave an interview to Bloomberg, which was highlighted in a Bloomberg-published article ‘Pakistan PM says “All hell” to break loose without debt deal’ as follows: ‘Pakistan Prime Minister Shehbaz Sharif made an urgent appeal for debt relief from rich nations as catastrophic floods exacerbated by climate change displaced millions of people in the South Asian nation. Pakistan has debt obligations in the next two months, he said in an interview with Bloomberg Television in New York, adding that his government had just signed an agreement with the International Monetary Fund with “very tough conditionalities” that include taxes on petroleum and electricity. …He noted a “yawning gap” between what Pakistan is asking for and what is available, warning that the nation is facing the imminent threat of epidemics and other dangers. “God forbid this happens, all hell will break,” Sharif said.’

The catastrophic floods have tremendously added to a debt sustainability worry that Pakistan faced even before the floods, as reportedly the country is among the most debt-distressed countries in the world. Hence, there is an urgent need for debt restructuring/relief, especially as floods impose greater import needs for instance, in terms of cotton and wheat, which enhances already high financing needs that the country faces– reportedly debt owed by Pakistan for 2022 stands at around $30 billion, while even after the recent release from the International Monetary Fund (IMF), and assistance from some other donors/creditors, only around $8 billion could be arranged up till now.

Here, it needs to be emphasised that Pakistan had very little to do in terms of the climate crisis unfolding there, it therefore, should not have to bear the cost of dealing with it in any significant way from either its own kitty, or by taking on added debt pressures.

In this regard, pointing towards a recent policy paper by United Nations, a September 23, an FT-published article pointed out ‘Pakistan should seek to suspend international debt repayments and restructure loans after devastating floods triggered a humanitarian emergency and imperilled the country’s finances, a UN policy memorandum has argued.The draft paper from the UN Development Programme, seen by The Financial Times, proposes that Pakistan negotiate debt relief with creditors to “stem the climate-change-fuelled crisis”.The memorandum, which the UNDP will share with Pakistan’s government this week, argues that creditors should consider debt relief so Islamabad can prioritise financing its disaster response over repaying loans.’

n another Bloomberg-published article ‘Pakistan seeks relief from bilateral creditors, not bondholders’, it was pointed out ‘Pakistan is seeking debt relief from bilateral creditors and not from commercial bondholders, Finance Minister Miftah Ismail said hours after comments from the nation’s premier roiled its dollar bonds.The South Asian country will repay on time its $1 billion sovereign bond due in December, Ismail said by text message in response to Bloomberg queries. A large portion of debt is in the form of deposits from “friendly countries” who have promised to roll them over, he added.   “We are seeking debt relief from the Paris Club’s bilateral creditor countries, just as it was done during” the pandemic, Ismail said. “We are not seeking, nor do we need to seek, any relief from our commercial bank debt nor from Eurobond debt.”’ Having said that, it needs to be strongly emphasised that any restructuring/relief effort by development partners/donors should include both the private sector and China, since they reportedly have significant presence in the debt portfolio of Pakistan.

Here, it needs to be emphasised that Pakistan had very little to do in terms of the climate crisis unfolding there, it therefore, should not have to bear the cost of dealing with it in any significant way from either its own kitty, or by taking on added debt pressures. An early September FT editorial ‘Pakistan’s perfect storm is an urgent call to action’ pointed out in this regard as follows ‘One-third of Pakistan is under water. …There is anger among leaders in the developing world about rich countries’ failure to provide resources for investment in adaptation. Their attitude, understandably, is that industrialised countries caused the problem with two centuries of carbon emissions, and they should pay to fix the damage. …In Pakistan, the challenge is complicated by the country’s debt crisis. Floods will only exacerbate Pakistan’s economic problems, creating risks that current IMF support is not enough to achieve debt sustainability. It is nonetheless important to keep the issues distinct: Pakistan should not be denied investment in climate adaptation because of fears cash will be diverted to shore up its short-term finances. Pakistanis desperately need help now, but they need a future as well.’

There is an urgent need for debt restructuring/relief, also because foreign exchange reserves are less than $10 billion– providing only around four to six weeks of import cover, while international best practice asks for at least three months of import cover cushion. A recent Bloomberg published article ‘Rupee approaches record low as Pakistan awaits Middle East aid’ pointed out in this regard ‘Pakistan’s currency is on the cusp of a record low, as billions of dollars of promised aid from the Middle East to bolster the hard-hit South Asian nation’s finances have yet to arrive. The rupee is about 0.4% away from 240.375 per dollar, the all-time low it reached earlier this year. The currency is among the worst performers globally in September, having fallen more than 8%. A weakening currency may worsen Pakistan’s price pressures after inflation surged to the highest in almost five decades. The nation is also grappling with the aftermath of a series of deadly floods and needs additional funds beyond the International Monetary Fund’s $1.1 billion loan to avert a default.’