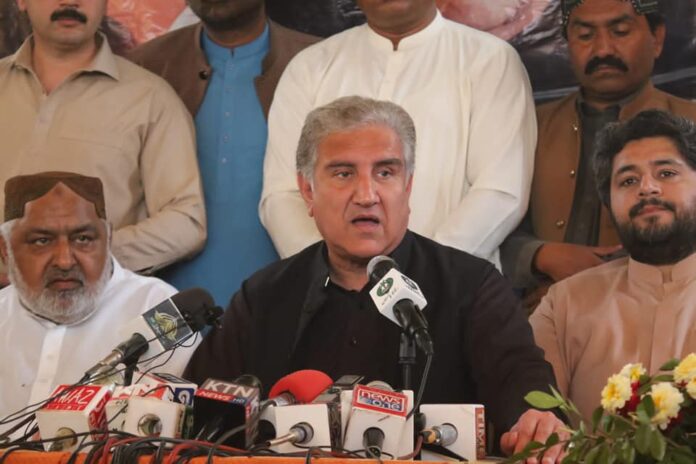 KARACHI: Foreign Minister Makhdoom Shah Mehmood Qureshi has said that Pakistan Tehreek-e-Insaf (PTI) has entered into Sindh with message of change through Haqooq-e-Sindh March that is the real march of people.

He was addressing a press conference in Tando Jam on Saturday as PTI’s Haqooq-e- Sindh March on its 8th day started amid massive participation of people. PTI Sindh President Ali Hyder Zaidi, Leader of the Opposition Haleem Adil Sheikh, Mubeen Jatoi, Khawand Bux Jahijo, and others were present on the occasion.

Shah Mehmood Qureshi said that people of Sindh has vigorously responded to Haqooq-e-Sindh March and now Karachi once again will come up to the expectations of Imran Khan as the March is entering into its final stages and will conclude in Karachi on March 06.

He said that Bilawal should think over cold response to his officially sponsored march by masses in Punjab that had already rejected PPP in general elections of 2013 and 2018 as PPP could not win even a single constituency of national and provincial assembly from Multan from where Zulfikar Ali Bhutto elected as MNA.

Politically aware people of Punjab had comprehended that it was not PPP of Bhutto but party of Zardari and ideological workers could not get along with Zardari’s approach, he asserted adding that Bilawal was in hurry to conclude their march and already changed schedule of PPP’s march seeing lack of public support in Central Punjab.

Extending his support to Bilawal Zardari’s demand of creation of South Punjab Province, Shah Mehmood Qureshi said that it is one of the important points of PTI’s manifesto.

PPP made big promises in past as well but they did not take any practical measures in the regard while Imran Khan not only included South Punjab in PTI manifesto but also taken concrete steps for facilitation of people of southern Punjab including setting up secretariats it Multan and Bahawalpur, appointing additional secretaries and additional Inspector General of police, amending rules of business and presence of secretaries of 16 departments.

PTI intended to ensure recruitment opportunities to youth of Southern Punjab in proportion to population of the area and considering fixing 33 percent quota in government jobs for the youth and proportional share in development schemes, he said.

Shah Mehmood said that he was ready to lay a bill in National Assembly about creation of South Punjab province and if Bilawal Zardari was sincere to people of the area the PPP legislators cast their vote in favour of that bill. “I know they will not do that as Bilawal Zardari earlier did not respond to my letter in the regard,” he added.

The Foreign Minister said that they were not anxious of a no-confidence motion as they were political people and understand politics because they have risen from the grassroots level and has not been imposed from anywhere while Bilawal got everything in a plate.

Referring to the Peshawar blast, Makhdoom Shah Mehmood Qureshi said that some elements wanted to destabilize Pakistan so they support the terrorists by providing arms and capital so that those elements keep our western borders warm.

He said that the Pakistan’s eastern neighbor who is also facing economic turmoil due to mismanagement of Covid-19 situation wanted to divert the world’s attention from the situation in illegally occupied Jammu and Kashmir.

Due to Pakistan government’s proper measures, the economy is stabilizing, industries have been revived and exports have increased while recently, the Prime Minister has also announced a special package for industries and it is not being digested by our enemies so they were hatching conspiracies, FM Qureshi maintained adding that Pakistan has already over powered those anti-state elements and would defeat them again.

The National Action Plan had two aspects and our military leadership and law enforcement agencies played their full role by sacrificing their lives and fulfilled their part while Prime Minister Imran Khan has played his role in the political arena but the opposition is showing lack of seriousness by making a fuss in the assembly and when it comes to legislation and debate these people walk out which is against the spirit of public service, he said.

Makhdoom Shah Mehmood Qureshi said that as Foreign Minister he presented detailed statistics regarding the involvement of neighboring country in terrorist activities in Pakistan and also presented a facts and evidence based dossier to United Nations.

Replying to a question, he said that Karachi was suffering from deprivation and Zardari regime was responsible for it as PPP has been in government in Sindh for 15 years and they got Rs. 9000 billion from the federation.

The responsibility of water shortage in Karachi, issue of garbage collection, non-cleaning of drains, dilapidated schools and bad hospitals in Karachi lies on Sindh government not the federal government, he said adding that Imran Khan issued extra funds for resolving issues of Karachi but provincial government also obstructed those initiatives.

When Imran Khan presented a plan to develop the islands to create employment opportunities, to develop the industry and enhance investment, the provincial government first issued NOC and then withdrew it, he said adding that the federation does not want to occupy those islands and it was ready to extend guarantee in writing that these islands will remain property of Sindh but they are pursuing the policy of ‘we will not play nor let others to play’.

Responding to a question on Kashmir, FM Qureshi said that with presence of 0.9 million Indian troops Illegally Occupied Jammu and Kashmir is the most militarized Zone in the world and youth is being abducted and martyred to supress the people of the valley.

“I have written 23 letters to the Secretary-General of the United Nations and the President of the Security Council regarding the situation in Occupied Jammu and Kashmir, while the issue came under discussion thrice at the United Nations,” he said adding that No previous government has made such efforts while difference between speeches of PM Imran Khan and Asif Zardari in UN was visible.

He also offered Indian PM Narender Modi to visit Muzafarabad to present his case and let the PM Imran Khan to visit Srinagar to present Pakistan’s perspective and then assess who gets the most public acceptance.

Addressing the public meeting, Makhdoom Shah Mehmood Qureshi further said that Sindh had broken the arrow in 2013 but Zardari kept it jointed with adhesive of rigging but present scenario in Sindh is indicating change in 2023.

Youth of Sindh will change fate of the province with their determination and resolve, he anticipated adding that people of Sindh were listening to false pledge of progress and prosperity since 15 years but that growth was limited to only a few associates of Zardari while laborer, peasant, youth and intellectual of Sindh is still looking for the real change.

He said that people of Sindh have tried PPP for 15 years now they should give a chance to PTI and see the real change taking place.

Imran Khan wanted to provide Health Card to people of Hyderabad and other districts of Sindh but PPP government is obstructing the move as 18th amendment has tied the hands of the federation, he said adding that if PPP do not create hurdles federal government is ready to announce issuance of Health Cards in Sindh like other provinces.

PTI government has already presented gift of a university to residents of Hyderabad through legislation in National assembly, he said and added that PM Imran Khan will visit Hyderabad soon and present gift of Hyderabad-Sukkur Motorway to the people of Sindh.

PTI Sindh president Syed Ali Hyder Zaidi addressing the public gathering said that scenario of change is developing in Sindh and people come out to break the arrow.

He said that Sindh government is closing 5 thousand schools in Sindh as they think people in Sindh do not need education while federal government wanted to open a university in Hyderabad but they are not issuing NOC for that. It means PPP wanted to keep people of Sindh ignorant, he commented.

PPP is denying Sindh card because they wanted to keep people sick they are not improving infrastructure as they wanted trouble for masses, he said adding that several development projects were awaiting completion for many years and even big cities look like ruins of Moen jo Daro.

Later, the caravan of Haqooq-e- Sindh March started from Tando Jam to Hyderabad, administration installed barbed wire and barriers in the way of the rally in Hyderabad.

It is pertinent to mention here that upon reaching Hyderabad Foreign Minister Shah Mehmood Qureshi did not attend the rally, much to the displeasure of Special Assistant to the Prime Minister on Sindh Affairs Arbab Ghulam Rahim and other senior PTI Sindh members.

Opposition Leader Sindh Assembly Haleem Adil Sheikh condemned the move and said that they cannot stop the tsunami of change by closing the roads. He said that blocking the way of march shows the ill motivation of Bilawal Zardari and his Government he said that the journey of change has already started in Sindh and no one could hinder it.