EVMs are pointless unless they end rigging allegations

The work to be done 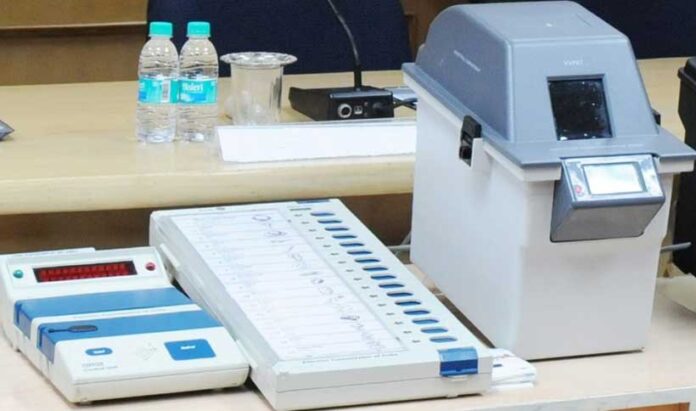 Recently, an alleged vote-buying and selling video surfaced on social media indicating the malpractice that takes the centrestage in every election or by-election. Soon after that, both the contesting parties traded barbs and blamed each other for bribing the voters and taking sworn testimonies.

The Election Commission of Pakistan took notice of the alleged video and ordered a forensic audit of the video. While both parties blamed each other for buying votes, the authenticity of the video is yet to be found.

Irrespective of the outcome of the video scandal and its authenticity, the other aspect that needs to be focused on is the prevalent rigging culture.

This is not the first time a rigging video has surfaced and might not be the last one. On one hand, it puts into the spotlight the discrepancies in the electoral process and on the other hand it exposes the vulnerability of a voter.

There is a need to apprehend (although visible) the challenges and problems associated with its use and find solutions for them now. Such as software hacking, machines storage and transportation etc to maximize the potential and minimize the possible inconveniences.

The first case indicates the economic vulnerability of a voter. And, the second case underlines the lack of voting culture and behaviour among the voters.

The incumbent government managed to pass 33 bills during the joint session of Parliament including a bill pertaining to the introduction of EVMs in the next general election and giving overseas Pakistanis the right to vote.

It was on the cards that it would be passed during the joint session even though the opposition was against the use of EVMs in the upcoming election.

But, the passing of the legislation on the use of EVMs in upcoming elections will not ensure smooth elections alone, there are many more hurdles that have to be overcome with collective efforts.

According to a news report, an estimated 400,000 EVMs will be required in the 2023 general elections in case elections are held on the same day across the country and the whole process would need around Rs 50-60 billion.

The amount spent by the ECP on the 2013 general elections was Rs 28 billion. So the introduction of EVMs will mean doubling the amount spent in the previous election.

This cost must bear fruit and must not go in vain. EVMs introduction is most likely to solve the problem of poll day rigging. For example, the problem of rejected votes, fake votes, spoilage of ballots, and delays in counting and reporting etc.

But, the focus will now shift to pre-poll and post-poll rigging.

This may be because they realize that their vote will not make any difference or do not trust the credibility of the elections. The EVMs introduction may inspire the youth to use their right and vote for a better future for the state.

Not only youth, but the EVMs introduction should also help inspire the general public who have lost trust in the electoral process. It should help them realise that their vote will be for the one they have chosen and will not be wasted.

The next step should be to educate and train the masses to use the EVMs. As the EVMs involve the use of technology and will be used for the first time, it may create difficulties for the voters unfamiliar with technology.

There is no point in introducing EVMs without educating and training the masses and removing the oppositions’ concerns because if that does not happen it will not bear fruit and the whole exercise will be worthless with an extra burden on the state.

If EVMs introduction goes well, then we might come out of ‘dharna politics’ and the elected governments might work freely instead of forever having to prove their credibility.

With EVMs to be used, the focus will be on pre-poll activities. There will be a surge in pre-poll rigging activities. The only solution The way forward is to economically emancipate the voters to lessen their vulnerability and to introduce free and fair voting culture among the masses.

The introduction of free voting culture has to be at the grassroots level. There is a need to strengthen the Local Governments and to develop a political culture among the public.

The introduction of EVMs in local governments is a big plus. The use of EVMs in local elections across the country will not only ensure transparency but also strengthen the political culture at the grass-root level.

Lastly, the major hurdle in the effective use of EVMs in the 2023 general elections is the wide political divide on their use. For example, 221 members voted in favour of the amended bill while 203 members opposed it. That the opposition is not too small to be ignored,so  it should be handled by achieving a political consensus. Which was not the case before the passing of the law.

Lastly, there is a need to apprehend (although visible) the challenges and problems associated with its use and find solutions for them now. Such as software hacking, Machines storage and transportation etc to maximize the potential and minimize the possible inconveniences.