Strategic significance of Bay of Bengal and Bangladesh’s ‘Balancing Capability’

How Bangladesh acts to promote its interests 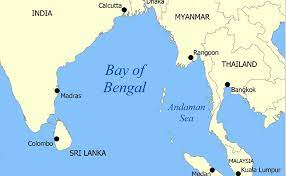 The name ‘Bay of Bengal’ is a matter of pride for Bengalis! Large cities like Madras (Chennai), Hyderabad, Bhubaneswar, in all areas or states, are located on the shores of the Bay of Bengal, but the sea is not named after them. Again, it was not named after a region like the Arabian Sea, but after Bengal or Bengal. That is why the world has to remember the name of Bengal from time to time. In the middle of Myanmar, Andaman Islands, Indonesia, Sri Lanka, Bangladesh and the vast territory of South India, the reservoir of 2.162 million square kilometers is named after Bengal. It is known to the world as the Bay of Bengal.

The Bay of Bengal has now become the centre of international politics due to its economic and strategic importance but in fact it extends to the bottom of Sri Lanka. It is the busiest international shipping route in the world. About 40,000 ships ply this route each year. Half of the world’s goods and fuel vessels use this route.

Looking at the picture of the Bay of Bengal, it is clear that its all-northern boundary has formed a parallel belt. It is as if a country has a water map in its taxpayer and has extended its exterior. The two sides on the outside have gradually increased and ended in Orissa, Andhra Pradesh and Tamil Nadu. On the other side, the Andaman Islands merge with Sumatra from Myanmar and turn right to join Sri Lanka. Cox’s Bazar, the largest beach in the world, the Sundarbans, the largest uninterrupted mangrove forest, and one of the world’s most delicious fish species, the habitat of hilsa, are linked and associated with the Bay of Bengal.

Now, the Bay of Bengal gets attention from world powers. The USA, the UK, China, India and  Japan have focused their attention on the ‘Bay of Bengal’. That is the strategy. The USA has shifted its policy from ‘Asia-Pacific’ towards ‘Indo-Pacific’ to counter China’s ‘BRI’. Both parties want Bangladesh into their respective blocs.

In this regard, Bangladesh is handling this issue tactically. It avoids involvement with the blocs directly. Despite having a request from the USA for years, Bangladesh didn’t show any interest to sign ACSA (Acquisition and Cross-Servicing Agreement) and GSOMIA (General Security of Military Information Agreement) agreements with the USA. On the other hand, When the Chinese Envoy to Bangladesh commented that Bangladesh shouldn’t join IPS this year, Bangladesh strongly protested against the remarks uttered by Chinese envoy saying Bangladesh is capable of forming its own national policy. This is the capability of Bangladesh. Basically, Bangladesh doesn’t like any controversy with anyone. Its aim is very simple and clear which is friendship to all, malice to none. Bangladesh wants and likes to go ahead with all regional and global actors.

The Bay of Bengal was historically important. Due to geopolitics, its importance has increased since the 1980s. Bangladesh is an important player in these geopolitics. The present government was pursuing a policy of maintaining good relations with all Indo-Pacific countries, avoiding conflict. And because of the balance, Bangladesh is an active partner of the USA’s IPS as well as China’s BRI. Basically, Bangladesh shows the rest of the countries in the region how to balance with big powers simultaneously. Its balancing capability is really praiseworthy and exemplary for many countries. USA-Japan-Australia-India formed ‘QUAD’ to counter China’s ‘BRI’

Whether Bangladesh is involved in the US-led Indo-Pacific Strategy (IPS) or the Chinese-led Belt and Road (BRI), it must maintain peace and the rule of law in the maritime region to reap the maximum economic benefits from the Bay of Bengal. Bangladesh needs to acquire natural resources as well as the ability to catch fish from the deep sea. If it is possible, it will open the way for Bangladesh to earn huge amount of foreign exchange just like fish and mineral garments.

The port plays an important role for connectivity. Bangladesh has three seaports. But due to depth constraints, large vessels (mother vessels) are still unable to accommodate. The establishment of a deep seaport at Matarbari in Cox’s bazar in collaboration with Japan will solve this problem as well as reduce the cost of transporting goods. According to the reports of Bangladeshi media outlets, Bangladesh trades about 9 thousand crore dollars a year by sea. Four and a half thousand foreign ships transport these imported and exported goods to Bangladesh. And Bangladesh has to pay about 900 crore dollars every year for the charter of these ships. Bangladesh has only 60 ships to transport goods at sea. In this case, Bangladesh has a serious shortage of capacity. Bangladesh needs to increase its capability.

The sea border of Bangladesh is 118,000 square kilometers. On the other hand, if all the rivers and haors (a kind of pond originating from and connected with rivers) of Bangladesh are added, it stands at 15,000 kilometers. Bangladesh needs training, education and infrastructure to increase its ability to extract resources from this vast ocean. At present Bangladesh has a Maritime University, the Oceanographic Department and the Oceanographic Research Centre. These institutions should also come forward to expand education in this sector.

Drug smuggling, piracy in the Malacca Strait, and pollution from ships or land are destroying the marine environment. Effective steps can be taken to address these crises jointly through the Bay of Bengal Initiative for Multi-Sectoral Technical and Economic Cooperation (BIMSTEC), the South Asian Association for Regional Cooperation (SAARC) and the Association of Southeast Asian Nations (ASEAN) Bangladesh has made changes in the Maritime Act of 1974. tHE Marine Economy Cell has been formed. Besides, a maritime economy action plan has been adopted. Bangladesh wants to join the ‘Colombo Security Conclave’ now. Its aim is to tackle the maritime threat.

Japan attaches great importance to a free and open Indo-Pacific region. Bangladesh is one of the partners of Japan’s Big-B initiative around the Bay of Bengal. Under this, Matarbari in Maheshkhali will be turned into a hub for import and export of electricity and energy, industry and sea. The Rohingya crisis could lead to instability in the region. So, Japan should play a significant role in case of the repatriation of Rohingya, which is a sustainable solution to this crisis.

The Bay of Bengal was historically important. Due to geopolitics, its importance has increased since the 1980s. Bangladesh is an important player in these geopolitics. The present government was pursuing a policy of maintaining good relations with all Indo-Pacific countries, avoiding conflict. And because of the balance, Bangladesh is an active partner of the USA’s  IPS as well as China’s BRI. Basically, Bangladesh shows the rest of the countries in the region how to balance with big powers simultaneously. Its balancing capability is really praiseworthy and exemplary for many countries. The US-Japan-Australia-India formed ‘QUAD’ to counter China’s ‘BRI’.