The poor are burning in fires

Workplace fires have become a menace for labourers 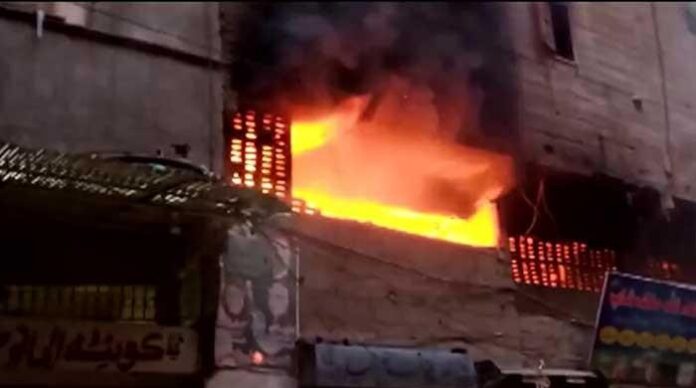 Incidents of arson have become commonplace in various cities of Pakistan. There have been at least seven such major incidents in Karachi this year. Laws and emergency evictions are talked about, but every new tragedy opens up a pool of government incompetence. A fire broke out in a leather bag manufacturing factory in Korangi Mehran Town, Karachi, killing 16 people on the spot. The provincial government and the district administration are most responsible for this but, instead of being ashamed of their shortcomings, they seem to be making political statements because none of their own poor are burning in the fire.

There is no doubt that the real cause of this tragic accident is yet to be determined, however all over the country, major fire accidents are usually due to carelessness and neglect of safety measures, be it in factories or multi-story buildings. Buildings are often undesigned for fire emergencies. Government agencies are responsible for enforcing regulations in these places, but instead of focusing on their work, they are busy collecting extortion; the consequences of this criminal negligence are often felt by the innocent poor in the form of fire.

After the horrific incident that took place in Mehran Town, Korangi, it has been revealed that this chemical factory was in a residential area and there was no emergency exit route. Even the grille in front of the windows and the roofed gate in the factory were also locked by the factory owners for fear of theft, and there was only one way to get to and from the factory when a fire broke out in a chemical drum, it was not possible for the workers to get out immediately and 16 workers were burnt to death. The people who died were all poor labourers, none of them relatives of the factory owners or management, so they are doing nothing but expressing regret and indulging in rhetoric.

If one thinks that the relatives of the workers who died in the Mehran Town fire incident will get some huge compensation, justice will be served and the killers will be handcuffed, then that person is living in some idiotic imaginary world

Incidents of arson are recurring in major cities of the country, and dozens of people have lost their lives in Karachi and Lahore so far, but there is still no campaign by district administrations and government agencies to prevent fires. Despite dozens of fires each year, the failure to ensure safety measures in large buildings and factories is a form of malpractice. Accidents at workplaces across the country are not surprising, but safety measures must be taken, so the lives of poor workers can be saved from being lost in these accidents.

We also have some places where safety measures are strictly followed and workers are trained, where accidents are almost non-existent, but a large number of people have become accustomed to breaking the law; where a common man is guilty, there is also negligence and connivance of the administration involved. There are many illegal factories in the megacities of the country. Is there no one to look after them? We have all the institutions and the eyes of the people working in these institutions are also very sharp. The work in these illegal factories is being done with their connivance. Government officials and factory owners are making money, while the poor labour lacks proper safety measures and or ways of escaping a blaze.

There is no denying the fact that the life of the poor is of no importance in our system; it prioritizes the protection of interests and lives of the elite and uses the life or death of the labour class in times of need to increase and save the assets, wealth and profits of the ruling class. If one thinks that the relatives of the workers who died in the Mehran Town fire incident will get some huge compensation, justice will be served and the killers will be handcuffed, then that person is living in some idiotic imaginary world.

How much justice was done in the previous fire incidents is not hidden from anyone. Even in this incident, at most a minor cog in the huge machine responsible will be made a scapegoat. In our class society, the law is only for the poor while the powerful tear it out.