China and USA in Southeast Asia: Myth and Reality 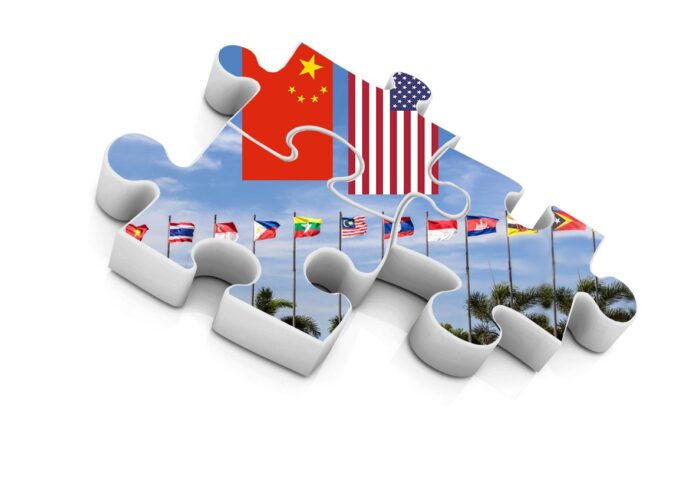 Political analysts across the world are busily engaged in analyzing and calculating the pros and cons of the China-US rivalry at regional and global levels, evaluating their capability and influence thereof, to let the world know actual position and make the necessary resetting for individual nations and assure in general the peace, security and development on a larger scale. In the last three decades, especially after the Cold War the relations between China and the USArevolved around three main focal points: a. human rights, b. trade, and c. security.

As the Chinese political system is based basically on Communist ideology with changes brought about by top leaders of China, human rights never occupied a prominent place in the management, unlike other democratic countries of the West where human rights and individual freedom remained a touchstone. However, despite their sharp differences on so many issues, they both give equal importance to the promotion of wealth or overall economy to dominate the region and the world as well.

From the beginning, the USA has been a capitalist country while in Marxism, which is the basis of Chinese politics and society, all things move according to the movement in economic factors and will also continue the same in future. Thus ultimately they both believe in expansion of trade with the countries of the world.

Security is the third point where China and the USA not only clash with each other but also make it a factor for doing business with the nations of the world and providing them a foolproof security network to make the nations feel and realise in national and global contexts. Over the years and decades because of a lot of controversies the issue of human rights has taken a back seat, but economy and security are the preferred fields for both and they aspire to be a force in the region of Southeast Asia, which no one can dare deny.

US interests in the region suffered badly due to change of the earlier policy adopted by President Obama and known as the ‘pivot to Asia’ and due to failure to achieve the Trans-Pacific Partnership (TPP), as again on account of rivalry and sharp differences between the USA and China the countries of the region preferred China rather than USA and they viewed US importance as meagre in comparison to Beijing, a powerful nation of their neighbourhood

By location, Southeast Asia is a sub-region of Asia consisting of the areas that are south of China, southeast of the Indian subcontinent and north-west of Australia and include two geographical regions: a. Mainland Southeast Asia, comprising Cambodia, Laos, Myanmar, Peninsular Malaysia, Thailand, and Vietnam, and b. Maritime Southeast Asia, with Andaman and Nicobar Islands (India), Brunei, East Malaysia, East Timor, Indonesia, Philippines, and Singapore. As of 2018, the total population of the region is 655 million, about 8.5 percent of the world’s population, the third most populous geographical region in Asia after South Asia and East Asia. It has occupied approx 1700,000 square kilometers, 10.5 percent of Asia and three percent of the Earth’s total land area. In the region there are several ethnic and cultural groups of diverse nature, with hundreds of languages spoken by the people of the area.

The single known regional organisation in the area is the Association of Southeast Asian Nations (ASEAN) established to integrate the area economically, politically, militarily, educationally as well as culturally. Initially, or till the close of the 1970s, China considered ASEAN countries as enemies but from the early 1980s when it began to grow rapidly economically and aspired to become a global power like the USA, Beijing changed its earlier policy and started mending and resolving differences with neighbouring countries of the region.

Under the new policy first it attempted to expand its power and influence in the region, ultimately in Asia as a whole. It was essential on the part of China to develop itself peacefully as well as to have a good rapport with the several members of ASEAN. Going a step further Beijing began a dialogue with ASEAN in 1991 and in 1996 became a full member of the body and worked for its members liberally in 1997 when the Asian financial crisis hit them badly. In the meantime, a decision was taken to create a 21st century-oriented partnership for good neighbourliness and mutual trust between China and ASEAN.

At the beginning of the new century a fresh chapter opened in China’s relations with ASEAN countries and it was promoted further to the level of strategic partnership for peace and prosperity in the region, along with creating dozens of machineries at various levels to make the works smooth and regular. In 2008, China sent its first ambassador to ASEAN and in 2011, the ASEAN-China Centre (ACC) was established, followed by the establishment of Beijing’s permanent mission in 2012. As China had left earlier its policy of ‘hide and bide’ it expanded itself in more areas than one, which included maritime and non-traditional security of the region. Following the devastation of the tsunami of 2004, it provided a help of $80 million to the affected countries, organized a China-ASEAN tsunami seminar in 2006, hosted workshops on the role of armed forces in disaster relief in 2007 and 2008.

In ASEAN countries, China, apart from working on regional cooperation of late, had focused on bilateral and multilateral levels for maritime cooperation in areas of law-enforcement which extended Chinese sovereignty beyond its borders. Of all schemes of Beijing, the ASEAN countries have responded favourably throughout the period, and during the Covid-19 pandemic , after the eruption of trade differences with the USA under Donald Trump, China has turned towards ASEAN countries and replaced the USA as its second largest partner after the European Union.

ASEAN and the USA

Although, US-ASEAN relations began in 1977, from the early 1990s, the economic development between them grew rapidly due to various US programmes focusing on trade, investment, technology transfer and education. The USA knew well that Southeast Asia is one of the fastest-growing and most dynamic regions of the world and for long the USA had remained a close partner of the area, continuing emphasis on economic development, energy cooperation, people-to-people exchanges, youth and education. However, US interests in the region suffered badly due to change of the earlier policy adopted by President Obama and known as the ‘pivot to Asia’ and due to failure to achieve the Trans-Pacific Partnership (TPP), as again on account of rivalry and sharp differences between the USA and China the countries of the region preferred China rather than USA and they viewed US importance as meagre in comparison to Beijing, a powerful nation of their neighbourhood.