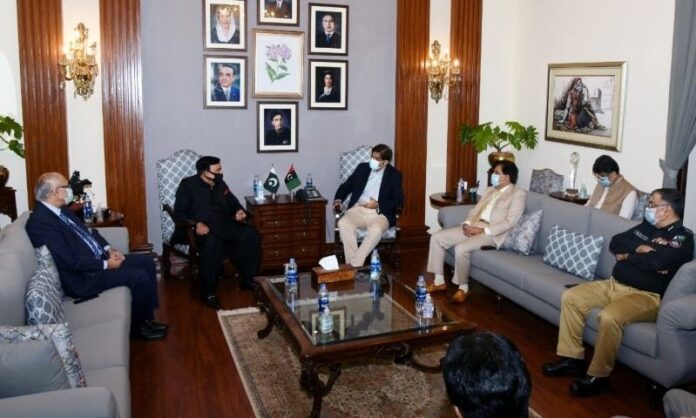 The interior minister discussed law and order situation in the province and other important matters with the CM. Both the leaders agreed on launching operation against dacoits in Kacha area.

Rasheed is visiting Karachi on the directives of Prime Minister Imran Khan to formulate a security strategy for Sindh against the backdrop of recent incidents of violence in the upper part of the province.

Rasheed told the chief minister that he could seek Rangers’ assistance for the operation at any time, according to a press release by the Sindh government.

Earlier in the meeting, the chief minister said Pakistan, which was previously ranked the sixth most dangerous country in the world, has now ranked 126th, implying that the law and order situation has improved.

“Previously, we had to travel with a convoy, but the PPP-led Sindh government initiated an operation [against criminal elements] and got the highways cleared,” he recalled, adding that back then, the law and order situation had worsened to such an extent in Karachi that the city saw the emergence of no-go areas.

He told the federal minister that the law and order in Karachi was so bad that it had become a no-go area. “The whole of Sindh is a rough area from Guddu to Kotri barrage, with only five to six kilometres of dense forest,” he said.

“You are the interior minister, you can come whenever you want and we will work together. We welcome you in Sindh,” CM Shah told Rasheed.

Rasheed said the interior ministry will provide Sindh with anything it needs.

Speaking on the occasion, Rasheed said that Karachi is the backbone of Pakistani economy and we will ensure law and order here. Rasheed also lauded the role of Sindh Rangers in maintaining law and order in Karachi.

Speaking on the occasion, the Sindh governor said that all the elements who hindered the development and prosperity of Sindh province would be eliminated.

Speaking to the media during a presser later on Thursday, Rasheed dismissed any rumours of governor rule within the province. He clarified that Prime Minister Imran Khan does not want to interfere in the matters of Sindh and said no operation is taking place in Karachi, adding the Centre would provide all kinds of weapons to the Sindh Police to eliminate the dacoits in the areas.

“If any big names are found to be involved in dacoities, they will be dealt with severely and terrorism cases will be registered against the culprits,” said Rasheed.

The interior minister added that the National Database and Registration Authority would take action against corrupt officials in Karachi who have facilitated criminals in obtaining fake identity cards.

Haleem Adil stayed in Katcha area for four days and arrived in Islamabad on Thursday.

The report of Haleem Adil showed that during last three months more than 250 people have been killed in Sukkur and Larkana region. In his report, he demanded to remove the Sindh inspector general of police.

The PTI VP said dacoits killed 10 people of Chachar tribe but no action was taken. In police encounter, dacoits targeted the APC of police with rocket launcher. He said three cops were martyred in firing of dacoits and some others injured. He said penetration of bullets into police APC is quite worrisome. He said inquiry should be made through NAB and other institutions about huge corruption in purchase of APCs for Sindh police.

Haleem Adil said that so far more than 450 people have already been killed in tribal clashes in this area. He said law and order in Sindh has worsened during the rule of PPP government.