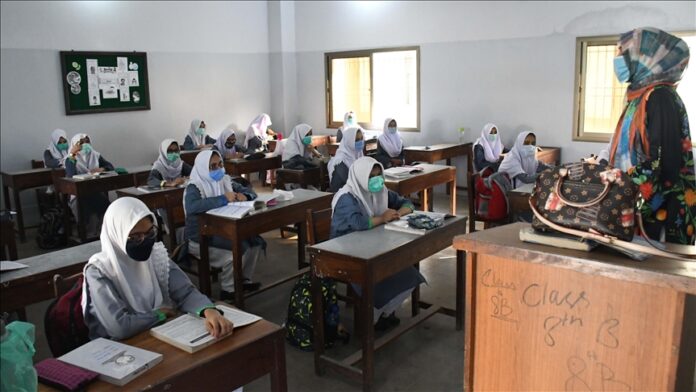 ISLAMABAD: In view of the alarming surge in coronavirus cases in the past week, the National Command and Operation Centre (NCOC) on Monday decided to review its “school opening modalities”.

The decision was taken in a meeting chaired by Minister for Planning and Development Asad Umar who also heads the forum.

While the widespread reopening of schools after lockdowns and vacations is generally not linked to rising Covid-19 rates, the government had shut schools in November and postponed exams to try to curb new infections and a rise in the number of people in hospitals with Covid-19 before opening them in phases in February.

The government portal keeping track of the outbreak in Pakistan on Monday reported 1,592 new infections of the coronavirus after conducting 34,347 tests, receiving back a positivity ratio of 4.63 per cent.

Seperately, Punjab School Education Department imposed restrictions in schools on extracurricular sports activities until the “resumption of the normalcy of educational activities”.

“Restrictions on Co-Curricular activities in the 7 Districts stated in the notification due to COVID 19. No Gala, sports activities or public gatherings,” Punjab School Education Minister Dr Murad Raas said in a tweet.

NOTIFICATION:
Restrictions on Co-Curricular activities in the 7 Districts stated in the notification due to COVID 19. No Gala, sports activities or public gatherings. pic.twitter.com/j7NFhiUVAk

The participants also considered deferring the opening up of cinemas, indoor weddings, and dine-in restaurants, which were expected to reopen from March 15. However, a decision on the matter has not been announced as yet.

The meeting also reviewed the rising positivity trend prevailing across the country and expressed its concerns over public complacency in following non-pharmaceutical interventions (NPIs or alternate measures to treat the disease other than medical treatment).

The forum directed the provincial administrations to ensure strict enforcement of NPIs at the grassroots level to contain the disease spread as slackness in adhering to safety guidelines would trigger another outbreak.

The government launched a nationwide vaccination campaign on February 3, with more than 400,000 doctors and frontline healthcare workers, teachers, and social workers being covered in the first phase because they run the highest risk of exposure to the contagious disease.

As per the roll-out plan, the second phase, due to start from March 10, will focus exclusively on citizens over the age of 60, who generally face a higher mortality risk from the virus, and all remaining healthcare workers, while the general public would be accommodated in the third phase.

Pakistan received its first tranche of the Sinopharm jabs, given by China as a “gift”, earlier this month. The shipment marked the first shots to be imported into the country where more than 592,100 cases of the disease have been reported since the outbreak in February last year.