Maryam says she is speaking for rights of the province 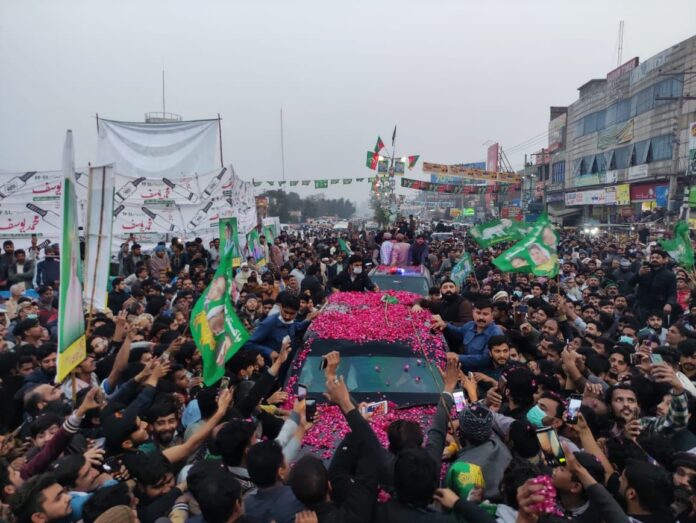 Pakistan Muslim League-Nawaz (PML-N) Vice President Maryam Nawaz arrived in Wazirabad to address a rally as part of the election campaign for PP-51, where she denied that she was playing the “Punjab card” by speaking in the provincial tongue, and instead insisted that she was speaking for the rights of the people in the region.

“I am daughter of Punjab and will continue to speak for the rights of the people of this province,” said Maryam while addressing the rally and asserted that she was not engaging in regional politics.

While blaming the incumbent government for issues such as bad governance, inflation, and unemployment, she maintained that her father and party supreme leader Nawaz Sharif would be able to fix all the issues of the people.

Maryam asked the crowd not to vote for the Pakistan Tehreek-e-Insaf (PTI) candidate in the upcoming by-election, saying “If they [PTI leaders] ask you [people] to vote for them show them your electricity and gas bills.”

“The country has been worn out but my dear selectors, don’t do this with Pakistan again,” she said, referring to the PTI coming into power. “Do your own work that the Constitution has assigned to you, don’t interfere with people’s work.”

Maryam claimed the “actual reason” why Prime Minister Imran Khan had been pursuing an open ballot for next month’s Senate elections was that his own MNAs and MPAs “are escaping from his grasp”.

Maryam said that today everyone including traders, farmers and labourers are being humiliated. People have no money for bread, milk, flour and sugar. She told workers that Nawaz Sharif will come and everything will be fine.

The PML-N VP alleged that Rs500 billion worth of medicines were stolen, Rs15,000 billion was borrowed and not a single brick was laid. She said that when it comes to snatching flour and sugar from Punjab, she will always stand by the Punjabis.

Maryam arrived at Zafar Ali Khan Chowk and then headed towards Allahwala Chowk of the city in the early evening. She addressed PML-N workers at Kutchery Chowk and then delivered an address at Sohdra Chowk as well.

“I say to Wazirabad police and administration […] I know that you yourself are frustrated [but] the nation is looking at you; if you instead of serving the country and the people try to serve anyone else, try to steal the vote and make a lost person win, then remember, Imran Khan came once but now at least Punjab won’t let him come [to power] again.”

Earlier today, she took shots against Prime Minister Imran, stating that the premier after “22 years of struggle” could not find the right people within his own party to award Senate tickets to.

While speaking to the media, Maryam lashed out at the selection of the PTI and said that Imran was always criticising other political parties but had himself issued tickets to “millionaires and billionaires”.

Questioning the move, she said the PTI wanted such individuals “who have no connection or service to the party” to buy votes through their resources and enter the Senate. “It is very important to block the path of such people.”

“People from every province in Pakistan have stood up to the ruling party,” she said, referring to the protests registered by PTI leaders in Sindh and Balochistan over the award of Senate tickets to Faisal Vawda and a few others.

The PML-N leader added that she hoped “good people and political people with a history of political struggle” would come to the upper house. She said she was “proud” of the PML-N and party supremo Nawaz Sharif for nominating ordinary workers of the party who “are not millionaires or multi-billionaires.” This is real change, she said, in a reference to PM Imran’s calls for tabdeeli.

She also pointed out that former premier Yousaf Raza Gilani had been selected as the joint candidate for the 11-party opposition alliance, the Pakistan Democratic Movement (PDM), as the opposition was trying to elect stellar leaders to the upper house.

“Keeping the situation in mind, I fear the no-confidence movement will begin alongside the Senate elections,” she added.

During the presser with media persons at Jati Umra before her departure, Maryam expressed her hopes that the PDM would stay intact even after the PTI has been removed from office.

She added that there had been no backdoor deals between the PML-N and any other party or the military. She said those dreaming of rifts among the ranks of the 11-party alliance, PDM, will face the same fate.

She also lamented the treatment meted out to protesting federal employees in Islamabad and criticised the show-cause notices and warning letters sent to bureaucrats in Punjab over their performance.

On the occasion, Maryam also said that she will not request the government to strike her name off the Exit Control List (ECL). The daughter of the former premier explained that she had filed a petition in the Lahore High Court (LHC) last year to have her name removed from the no-fly list but the plea got delayed due to the coronavirus pandemic.

While the surgery she needs could not be performed in Pakistan, she maintained that she would not live abroad. “I do not wish to go anywhere, I want to live in Pakistan. Even if someone comes to my house and requests me to leave the country, I won’t,” she vowed.

In a statement issued earlier, PML-N Information Secretary Marriyum Aurangzeb had also alleged that members of the PTI were in disagreement with the prime minister for “selling tickets”. She said this “revolt” of PTI members had laid bare the premier’s campaign for open balloting.

The by-polls in NA-75 and PP-51 will be organised on February 19, according to the schedule issued by the Election Commission of Pakistan (ECP).