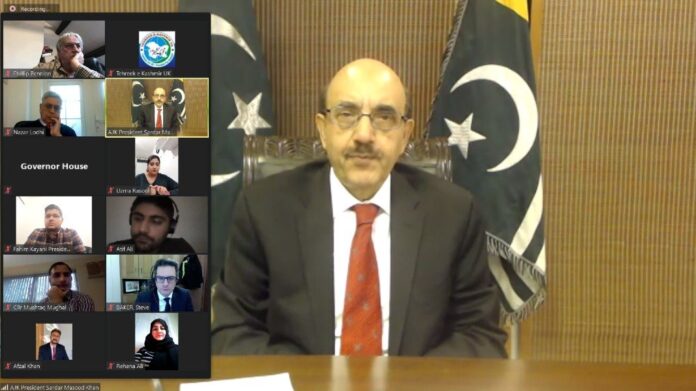 Azad Jammu and Kashmir (AJK) President Sardar Masood Khan has categorically stated that the Indian dream of turning the disputed territory into a Hindu Rashtra would never materialise.

The Kashmiri people will fight for their right to self-determination until their last drop of blood, he said while addressing a webinar on “Marginalisation of Kashmiris in the Illegally Occupied Jammu and Kashmir by Indian Government”, organised by the Islamabad Policy Research Institute (IPRI) as the keynote speaker.

“Despite India’s policy of irredentism and colonialism, Kashmiris have vowed to continue their struggle for freedom and self-determination by giving their blood to keep the flame of liberty burning. I say with conviction that the truth will prevail, evil will be crushed, and the Indian criminals will be brought to justice,” Khan affirmed.

He said that the whole population of occupied Jammu and Kashmir has been under siege of the Indian Army since August 5 last year, and the occupation troops are ruthlessly engaged in crimes like the ethnic cleansing of the Kashmiri people, which are not only crimes against humanity but the war crimes as well.

Khan said that the BJP-RSS regime is taking systematic steps in Indian Occupied Kashmir (IOK) to alter its demography, its geography, its statehood, and the rights of the people of Kashmir recognized by international law.

“Jammu and Kashmir, as we knew it and as recognised by the UN is disappearing before our very eyes,” he warned

He elaborated that last year on August 5, after invasion and forcibly annexing the occupied territory with its federation, it arbitrarily and in violation of the UN Security Council resolutions divided the occupied state into two parts and designated them as federal territories.

The president said that later last year, another sinister plan was implemented to ruthlessly take Kashmir away from Kashmiris, and Pakistan where more than 2 million Hindus from India have been illicitly settled inside the occupied territory. “The real target is the illegal settlement of more than 5 million in the coming years. Kashmir will no more remain Kashmir: it will become Hindustan, a Hindu Rashtra, with a completely marginalized Muslim population,” he maintained.

The AJK president also informed his audience of how legal businesses of Kashmiri Muslims are being delegitimised under illegal edicts and their land is being commandeered for settlements and Hindu enterprises. “Any part of the sovereign territory of Kashmiris is fair game for confiscation,” said Khan.

Speaking of the imposition of a counterfeit political class on Kashmiris, the President said that with ongoing gerrymandering or redistricting, Muslims are being reduced to a minority even in the constituencies where they have been in majority. “Holding of the recent farcical local elections, the cycle for the total disenfranchisement and dispossession of Kashmiris is being completed”, he informed.

President AJK said that crimes against humanity, ethnic cleansing and war crimes – all indictable offences under international law. He added that the campaign is not just about the marginalization of Kashmiris, but their total annihilation and what is happening in the IOJK is genocide as defined in Article 2 of the 1948 Genocide Convention.

“Scores of young men are being killed in fake encounters. Nobody knows the fate of more than 13,000 young boys rounded up in 2019 and put into concentration camps. Our top Kashmiris leadership is either in the most infamous jails in India or are imprisoned in their houses,” he said.

Khan urged the participants of the webinar to issue a communiqué demanding the release of our leaders – Asiya Andrabi, Yasin Malik, Shabbir Shah, Ashraf Sehrai, and Musrat Alam Bhatt; and remove restrictions on Syed Ali Geelani and Mirwaiz Umer Farooq.

He once again called to change the Kashmir movement into an international civil rights movement, to move with energy and ingenuity to reverse the vicious brutalization of the Kashmiris and block India’s path of fascism and its Hindutva doctrine.

“We are trying to break the silence of the international community in the UN, the Organisation of Islamic Cooperation, European Parliament, other national parliaments, and multilateral forums,” he concluded.

ISLAMABAD: Smaller parties of the Pakistan Democratic Movement (PDM) have expressed their reservations about the role of the two major political parties in the alliance,...
Read more
- Advertisment -