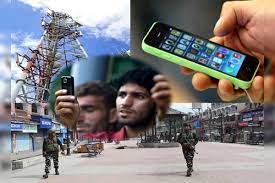 Indian Illegally Occupied Jammu and Kashmir (IIOJK) has recorded the highest number of internet shutdowns across the globe imposed by the Indian government during the last two years in sheer violation of the United Nations’ declaration on internet access as a fundamental right.

“During the year 2020, out of the total 155 internet shutdowns globally, India alone accounted for 109 which are contrary to the UN’s declaration on internet access as a fundamental right”, an official source revealed.

In the year 2021, out of the 182 internet restrictions recorded worldwide, 106 happened in India and alone IIOJK has recorded 85 out of the 106 shutdowns imposed by the Indian government.

Pulwama, Srinagar and Kulgam were the most affected areas of the occupied territory in terms of internet shutdowns.

According to the Digital Rights experts, internet shutdowns run against India’s commitment to international human rights laws. The internet suspension in IIOJK causes inconvenience to people and affects their businesses.

Most of the business activities in current times depend on internet services, but frequent internet blockade is taking a toll on people’s businesses.

Almost 90 percent of small business loans are likely to become non-performing assets. Dozens of students are preparing for various competitive exams; however, in the absence of internet services, they are suffering a lot and now they are choosing to go to other areas.

Talking to APP, Digital Rights activist Nighat Dad said that the internet shutdowns had witnessed the upward trend worldwide during the last few years. However, IIOJK had recorded the highest shutdowns where the Indian government imposed internet restriction to suppress their voice.

“Since the Indian government is not listening to what the world is criticizing and condemning, the UN must remind India, which calls itself a democratic state, of the fact that it is violating the international human rights framework by restricting internet facility”, she observed.

Arbitrary internet shutdowns with unidentified reasons had larger impact on the social and economic lives of the citizens. Internet had become a basic right of the citizens and was interconnected with all other rights, she said.

“The right to internet facility is not merely limited to merely freedom of expression and communication but to the economic rights. During COVID-19 when the whole word was observing lockdown, people relied on internet for their businesses and jobs for their economic survival”, she said.

“The countries which violate internet rights not only violate the international human rights framework, but also the rights under their own constitution”, Nighat Dad said.