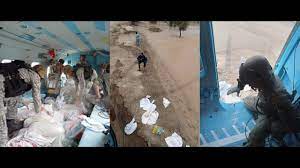 The Pakistan Air Force (PAF) on Monday it was actively participating in the rescue and relief operations in flood affected areas of Balochistan.

The PAF helicopter fleet had carried some 16,995 pounds of relief goods to the flood affected areas, which were cut off by roads due to torrential rains spell and flash floods, a news release said.

Despite inclement weather conditions throughout the country, especially in the flood stricken areas, the PAF personnel were working hard to provide humanitarian assistance to flood affectees, the news release added.

Chief of the Air Staff Air Chief Marshal Zaheer Ahmed Baber Sidhu has directed the respective branches of PAF to employ maximum efforts towards relief and rescue operations for the flood affected people of Balochistan.

In the recent heavy rains spell and flash floods, Pakistan Navy through utilizing its resources was providing support to the Civil Administration of Balochistan in undergoing rescue and relief operations, a Pakistan Navy media release said.

Pakistan Navy has set up a tent village at Bela near Uthal to provide shelter to the locals who have lost their homes in the flash floods. Food and health facilities are being provided to the displaced persons at the tent village.

Moreover, free medical camps were established in the area to provide first aid and free medical facilities to the locals. A dedicated team of doctors and paramedical staff is providing treatment and free medicines to the aggrieved populace.

The relief operation in Balochistan is a practical manifestation of the Pakistan Navy’s resolve to extend all-out support to fellow countrymen in their hour of need.

LAHORE: As a result of the departmental measures taken on the orders of retired Maj. Azam Suleman Khan, ombudsman of Punjab, the revenue of...
Read more
NATIONAL

ISLAMABAD: National Transmission & Despatch Company (NTDC) has devised a plan to generate power with cheap fuels during the next ten years and forwarded...
Read more
- Advertisment -