Rehmani demands release of all Hurriyat leaders from jails before Eid 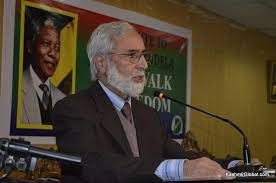 The Chairman of Jammu and Kashmir Peoples Freedom League, Muhammad Farooq Rehmani has drawn attention of the United Nations and other global rights’ bodies to the worsening political situation of the Indian illegally occupied Jammu and Kashmir and plight of political detainees in different jails and demanded their release before Eid.

Muhammad Farooq Rehmani in a statement issued in Islamabad said that since the leadership was incarcerated for years, while India considered any such call from any government as an interference in its affairs, so the UN and its rights groups should build direct pressure on the Modi establishment to respect humanitarian calls and release detainees.

He said that Kashmiris were not only being arrested and killed but they were being brutalised and their homes and shops were seized, sealed, burnt and bulldozed against the letter and spirit of the Constitution itself. And, People’s peaceful struggle according to the UN Charter & relevant resolutions remained banned, he deplored. He said all the families and parents of hundreds and thousands of political prisoners were suffering from traumatic and enormous conditions as they were not allowed to have physical meetings with their detained relatives.