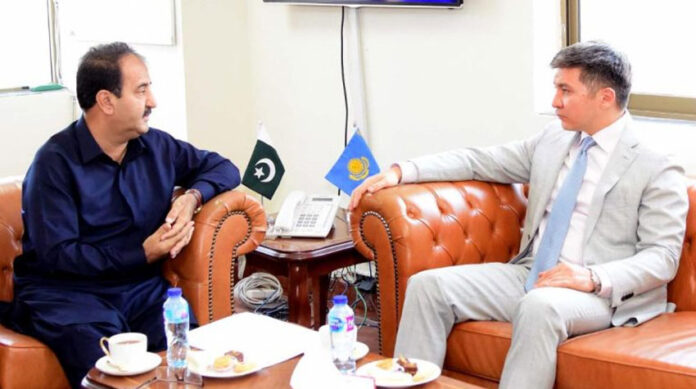 The Ambassador of the Republic of Kazakhstan to Pakistan H.E Yerzhan Kistanfin called on the Federal Minister for Science and Technology (MoST) Agha Hassan Baloch at his office here on Monday.

The minister welcomed the Ambassador and said that Pakistan highly values the ties with Kazakhstan and wants to further expand bilateral cooperation in various areas of mutual interest, said a press release.

He highlighted the tremendous opportunities for cooperation that exist between the two countries which need to be explored for the immense benefit of both sides. He expressed the desire for a broad-based and deeper relationship with the Republic of Kazakhstan.

Agha Hassan Baloch said that Pakistan is very fertile and full of potential that must be explored. He said that Gwadar port offers enormous avenues for Kazakhstan for promoting trade with the Middle East and other countries of the world.

He said soon the Gwadar will be the trade hub and landlocked republics will avail access to the world through the development of Gwadar port which will bring about socio-economic uplift in the whole region. He also mentioned the rich mineral resources in Balochistan and the strategy for developing the mineral sector there.

Both the dignitaries discussed the process of signing a Memorandum of Understanding (MoU) for establishing a joint research council for cooperation in the field of science and technology that is likely to be inked in the next couple of months.

Agha Hassan Baloch said that an implementation plan should follow the MoU in the future so that both entities work on strategies these strategies.

H.E Yerzhan Kistafin briefed the federal minister about an international gathering that was arranged in Kazakhstan in the recent past on the philosophy and services of Dr Muhammad Iqbal, the poet of the east. He also mentioned the trade Summit in Expo Centre, Kazakhstan this year where Pakistani companies showcased their products to the Kazakhstan business community. He underlined the need for enhanced bilateral ties with Pakistan in the field of science and various economic sectors. This is time to revive the relationship between two brotherly Muslim countries.

The Ambassador said that Pakistan possesses a remarkable and perfect location on the map of the world and all possible practical measures will be taken to have utmost benefits from this location.

Federal Minister for Science and Technology Agha Hassan Baloch said that collaboration in scientific research can be a cornerstone in increasing the capability of the countries. He praised the Prime Minister’s commitment to all the possible measures in this regard.