Not mutually contradictory at all 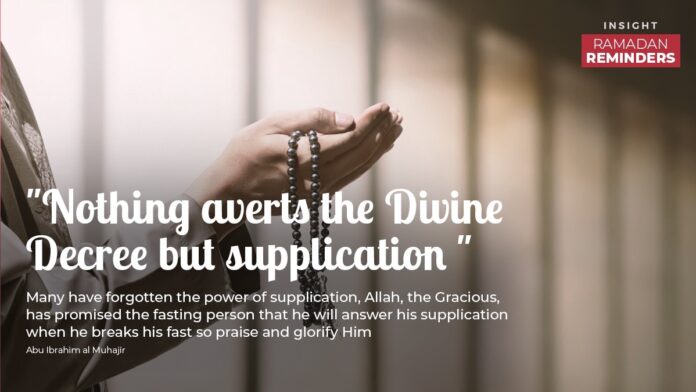 Does man possess free will to choose his course of action? Does God know all along everything that is ever going to happen? If so, why pray to God, or worry about choosing the best option? What is taqdeer (the Divine decree)? Is it etched in stone? Can one change the future? Of what use are prayers and one’s own volition, if the answer to this is in the negative? Even if supplications were effective, what would be their point? Surely, man – with his limited wisdom – cannot hope to improve upon an All-wise God’s plan for him. Again, what kind of sense does it make to tell an All-knowing God about one’s needs and desires? Is an Omniscient God not already aware of all one’s wants and troubles?

What with very few theists ending up giving a good account of themselves when asked these, and similar, questions; the atheists have become accustomed to presenting these questions as conclusive evidence against the coherence and reasonableness of the theistic narrative. In what follows, I propose to take up these questions and try to answer them unambiguously from the Quranic perspective. While I do so, I propose to demonstrate that these answers by no means contradict each other.

No way can God’s plan be improved any more than He can be informed about something He does not already know. The point of the supplication is not that at all. The point is asking God for help. By doing that, man reminds himself that it is God who is ultimately in-charge. And that automatically makes for a much better conduct on his own part – it should, at any rate. When, for example, on taking the driving wheel I pray for a safe trip, I remind myself that driving carefully on my part constitutes a necessary condition for that, even if it is not a sufficient condition on account of countless other variables out of my control. Whether I end up having a safe trip or otherwise, my prayer is therefore not in vain.

What is true of praying for a safe trip is true of all supplications. It reminds one of God, as well as one’s own duties and limitations – which is the core of all worship. In this perspective, not praying to God (and believing one’s actions to be sufficient) is a form of arrogance. The Quranic God is not a philosophical idea or the first cause (or prime mover) of the universe who retired (so to speak) after creating immutable laws of the universe. He is a Living, personal God who listens to man, answers his prayers, and is constantly involved in the running of the world.

The Quranic God is not a philosophical idea or the first cause (or prime mover) of the universe who retired (so to speak) after creating immutable laws of the universe. He is a Living, personal God who listens to man, answers his prayers, and is constantly involved in the running of the world.

Nobody can change the future either. There is no surprising God, for He knows that future all along. When you avoid a brick by ducking on seeing it coming your way, you do not change the future. There was always going to be just the one future – that in which the brick was not going to hit you. But your action played an important part in realizing this ‘future’, which constituted the Divine decree. Of course, you could still get hit despite trying to avoid it, because as far as results are concerned, your role is not decisive. That would also have been Divine decree.

The relationship between the measures man takes and the Divine decree is best illustrated through the incident reported by Abdullah ibn Abbas (RA), included both in Bukhari and Muslim. Umar ibn Khattab (RA), leading a large body of Muslims, set out on a mission to Syria. When he reached Sargh however, he was informed that a plague had broken out in Syria. There was much consultation, but opinion was divided between pressing on and retreating momentarily. Finally, the elders of Quraysh were asked for their counsel. They were unanimous in their opinion that people must not be exposed to the plague. Umar decided accordingly.

Army commander Abu Ubaydah ibn Jarrah (RA) was none too pleased. ‘Are you fleeing from the decree of Allah, Umar?’ he asked. To which, Umar replied, ‘Yes, we are fleeing from the decree of Allah to the decree of Allah. If you had camels and they went down into a valley which had two sides, one of which was fertile and the other barren – which would you choose? Is it not that if you grazed them on the fertile side, then that grazing would be by the decree of Allah, and if you grazed them on the barren side, then that grazing would also be by the decree of Allah?’ Soon afterwards, Abdur Rahman ibn Awf (RA), who had not participated in the deliberations on account of being absent because of an errand, returned and said, ‘I have some knowledge regarding this issue. I heard the Prophet (peace be upon him) say that when you hear that a plague is in a land, do not go to it and if it occurs in a land that you are already in, then do not leave it, fleeing from it.’ Umar praised Allah for enabling him to make the correct decision and that was the end of the matter.

There is no fleeing from the Divine decree. But man is supposed to decide upon the best course of action based on the information at his disposal at any given time. God’s plan for man is supreme, but part of that plan is that man plays a role in it too, since it is his test. Else, man would merely be an automaton, of which it would be absurd to expect responsibility in this life or the next. Despite his best efforts, man will still often fail, which brings us full circle back to supplication. Far from being three irreconcilable items therefore, the Divine decree, human efforts, and supplication constitute important aspects of the same bigger picture. Do not let any atheist tell you otherwise.