In the thick of economic crisis 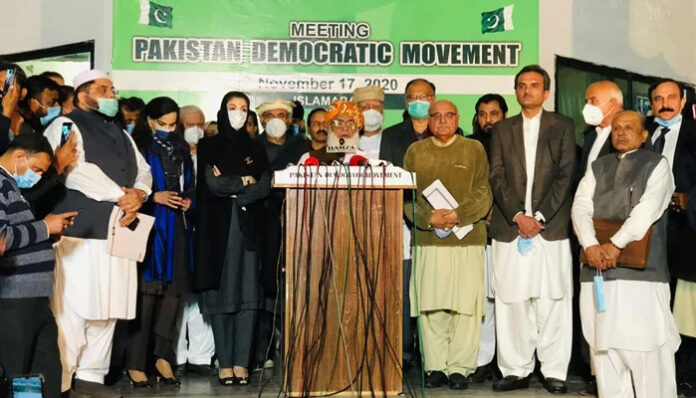 The day of 10 April 2022 would remain a watershed in Pakistan’s history. On this fateful day, the Pakistan Democratic Movement (PDM), which was a coalition of opposition parties, founded in September 2020 and led by Maulana Fazl-ur Rahman of the Jamiat Ulema-e Islam, ousted the government of the Pakistan Tehrek-e Insaf (PTI) through a democratic method of launching a no-confidence motion.

The PDM had begun its efforts more than one year and a half before Pakistan could reach April 2022 and before any foreign conspiracy could be hatched to overthrow the PTI’s government. The main factor that brought the coalition parties on the platform of the PDM was the malfunctioning of the Results Transmission System (RTS) of the Election Commission of Pakistan while conducting the general elections on 25 July 2018. The RTS played a role in delaying the announcement of results and manipulating the electoral result. Another factor was the alleged role of the then Major General Faiz Hameed, as the Director General of Counter Terrorism Wing of the ISI (from January 2017 to April 2019), in swaying the elections in favour of the PTI and against the rest of the political parties. The Pakistan Muslim League of Nawaz Sharif (PML-N) was the worst sufferer which saw the “Agriculture Department” in South Punjab thrashing its party’s ticket holders and forcing them to quit the party.

Economic mismanagement engulfed the PTI’s government, which could not perform any of the feats that it had touted it would during the election campaign. This was the failure of the hybrid experiment: the front would be civil and the back would be the military supported by the judiciary. Powers of the National Accountability Bureau were misused to chastise politicians of the opposition. The hybrid experiment foundered on the touchstone of reality: the government cannot be run by mere sloganeering and speeches. The PTI failed to deliver anything substantial on the ground.

Post-April 2022 began the test of the PDM on how to manage the economy. The PDM could have avoided opting to become a willing coalition to run the country. The fear of being robbed again by any intrigue in the next general elections, however, forced the PDM to settle on holding the reins of power. The dread was that if the PTI’s government persisted, the next Chief of Army Staff (COAS) would be of its choice, not acceptable to the PDM. To elaborate, the fear of General Hameed becoming the COAS near the end of this year was the main reason prompting the PDM to supplant the PTI’s government. It was expected that, as the COAS, General Hameed would again favour the PTI to win the next general elections. The PDM wanted to conclude the hybrid experiment.

In so doing, the PDM also risked its own reputation by gearing up for rising to the challenge of managing the economy which had been in the doldrums. The PTI could not reduce the import bill to lessen trade deficit just because this step could disgruntle its voters belonging overwhelmingly to the upper and upper middle classes inclined to use luxurious imported items. This is one of the examples of the way the PTI remained unsuccessful in managing the economy.

Hopefully, the PDM ensures that its affairs stand clear of the charges of corruption. Instead of meeting the objectives of the business tycoons and mafias that joined its ranks, the PDM would warrant transparency in running the government’s affairs. Failing on this account would open the door for the dissociation of the masses, whether the military steps in or not.

The occasion of 10 April 2022 was also a seminal moment because the military avoided stepping in to correct the trajectory. Contrary to the past practices when the military kept looking for a chance to create disrepute for the sitting government and impose martial law, the military decided this time to stay neutral and within the constitutional limits. In so doing, the military might be favouring the Constitution, but the reality was deeper than that.

To scale the walls of the Pakistan Television and announce to have taken over the country might not be an arduous task to undertake by uniformed dissenters; however, the real challenge would emerge afterwards in the form of how to manage the economy, which had gone dependent on foreign loans sought from the International Monetary Fund (IMF). The military knew that the option of seeking bilateral aid from friendly countries had been over-squeezed, leaving little leeway behind. Hence, the major deterrence was two-pronged: first, the country could not be run economically; and second, the IMF could not be mollified.

Any party, be it the PDM or the military, would have to take unpopular decisions to run the country. The military sidestepped whereas the PDM volunteered doing so. The PDM decided to be a willing horse to enter the corridors of power which would permit it to secure the transparency of the next general elections during which General Hameed would not be the COAS. To elaborate, it is now known that, with the PDM at the helm of affairs, someone other than General Hameed would be permitted to become the COAS.

This is essentially a struggle between civil and military to hog more space. Presently, the military is caught in the crossfire. On the one hand, it had annoyed the political parties which constitute the PDM, whereas on the other hand, it could not come up to the expectations of the PTI which wanted it to sabotage the no-confidence move of the PDM.

From a different perspective, the PDM is lucky in the sense that the region is not hit by any war which could make the military an unavoidable partner of an invading foreign army. The foreign forces have vacated Afghanistan. If this were not the case, the no-confidence motion would not have been successful. It is not the willful, flaunted, generous neutrality of the military to stay away from the political course; instead, it is the peaceful surrounding that diminishes the necessity of the military’s might to settle the national affairs. That is, the serene neighbourhood renders the military irrelevant and ensures the continuation of the democratic system and respect for the Constitution.

Hopefully, the PDM ensures that its affairs stand clear of the charges of corruption. Instead of meeting the objectives of the business tycoons and mafias that joined its ranks, the PDM would warrant transparency in running the government’s affairs. Failing on this account would open the door for the dissociation of the masses, whether the military steps in or not.

Facebook
Twitter
Linkedin
WhatsApp
Email
Previous articleAntidote for conspiracy narrative
Next articleBan on luxury goods import to save $4b: Shehbaz