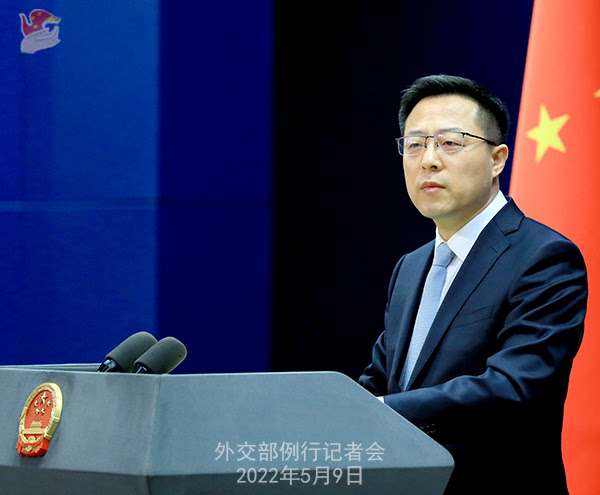 ISLAMABAD: China has accused the US for using democracy as a tool and a weapon to undermine democracy in the name of democracy, to incite division and confrontation, and to meddle in other countries’ internal affairs, causing catastrophic consequences.

It merits mention that the outgoing Prime Minister of Pakistan Imran Khan has recently accused the US for engineering a regime change operation to overthrow his government.

Addressing media at a regular briefing, China’s Foreign Ministry spokesman Zhao Lijian said that Chinese Ministry of Foreign Affairs had released a Fact Sheet on the dubious role of National Endowment for Democracy (NED) on its website on May 7.

“The fact sheet, with about 12,000 words in six sections, lays bare the true face of the National Endowment for Democracy (NED) through hundreds of specific incidents gathered from public reports,” he said.

He said the NED, as one of the US government’s main “foot soldiers” and “white gloves”, has subverted lawful governments and cultivated pro-US puppet forces under the pretext of democracy.

“NED was seen behind color revolutions instigated and orchestrated by the US, including the disintegration of the Soviet Union, the Rose Revolution in Georgia, the Orange Revolution in Ukraine and the Arab Spring,” he said.

He added that the NED has been stirring up protests and demonstrations in Thailand, inciting the opposition parties in Nicaragua to seize power by force, funding anti-Cuba forces to manipulate public sentiment against the government, and long interfering in Venezuela’s internal affairs through various means.

“Hellbent on disrupting the world, NED has not brought social stability and development or contented lives and good work to other countries. On the contrary, it has caused a host of issues including withered livelihood, languishing economy and social confrontation”.

“It also colludes with ‘Taiwan independence’ forces and attempts to incite division and disrupt stability across the Taiwan Strait, which has been met with indignation and opposition from the Chinese people on both sides of the Strait,” he added.

“NED is actually the ‘second CIA’ of the US. It is by no means an NGO that provides support for democracy abroad. Instead, it takes orders directly from the US government and manipulates NGOs through the provision of funding to conduct subversion, infiltration and sabotage to serve US strategic interests”.

“We believe the international community will see its true face more and more clearly, and more countries will expose its ugly track record in various forms. In today’s world, peace and development remains the theme of our times. Those that meddle in other countries’ domestic affairs are doomed to fail no matter what disguise they use,” he added.

Responding to another question, Zhao Lijian said that China and Pakistan are all-weather strategic cooperative partners with extensive and deep cooperation in various sectors.

“China is ready to strengthen the alignment of development strategies with Pakistan, promote the high-level development of the China-Pakistan Economic Corridor, and extend the corridor to health, industrial, trade, digital and green development”.

“We will continue to support Chinese companies in stepping up cooperation with Pakistan, help Pakistan advance its industrialization process and improve its capability of sustainable development. We hope the Pakistani side can create a safe and enabling environment for Chinese companies’ investment and development in Pakistan,” he concluded.

TEL AVIV: The Israeli air force said it had carried out overnight air strikes against sites of the Islamist movement Hamas in the Gaza...
Read more
World

DOHA: Proudly Muslim Qatar has taken advantage of the World Cup to reach out to the hundreds of thousands of visiting fans to change...
Read more
World

DONETSK REGION, UKRAINE: On the roads leading to the front in Ukraine's war-torn east, every morning begins with a familiar scene -- soldiers filling...
Read more
- Advertisment -