No visa waiver for Israel 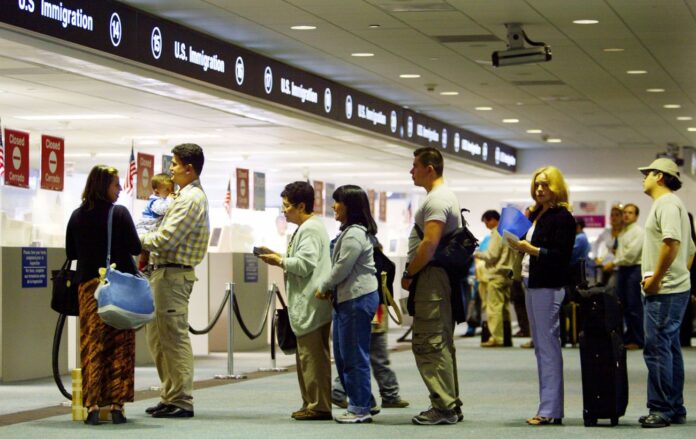 Last week the Jerusalem Post ran a story under the headline “Palestinian Americans to be allowed to land at Ben Gurion Airport.” Israeli officials are now saying that instead of only permitting Palestinian Americans to cross over the Allenby Bridge from Jordan, they will allow them to fly into Israel’s airport and proceed from there to the West Bank. Israel is offering to make this change in their treatment of Palestinian Americans to gain entry into the US’s Visa Waiver Program (VWP). If Israel were to gain admittance, its citizens would be able to travel to the USA without first securing a visa. It is a privileged recognition that Israel has sought since the VWP was first created.

One key reason why this has never happened, despite continued pressure from Israel’s supporters in Washington, is because for any country to join the visa waiver program they must guarantee reciprocity — that is, it must ensure that it will treat all visiting Americans without discrimination and the USA must agree to do the same with regard to its citizens.

The problem is that over several decades clear evidence exists that Israel has engaged in disgraceful, degrading, and discriminatory treatment of US citizens of Arab descent who travel to the country. It appears that the Jerusalem Post story is Israel’s effort to signal to Washington that it is now ready to meet at least some of the US requirements. There are, however, several reasons I find this Israeli move to be both suspicious as well as wholly inadequate.

It is suspicious because in 2014, the last time Israel was pressing to enter the program, Haaretz ran a story under the headline “Israel to US: We’ll ease stance on Pal-Americans, if we join the visa waiver program.” Back then, it blamed the Oslo Accords for its refusal to allow Palestinian Americans to fly into Ben Gurion Airport. Officials claimed that they were respecting the Accords and the Palestinian Authority in requiring Palestinians to cross over the Allenby Bridge. However, there is no such provision in the Oslo Accords. And despite having said they would make this change seven years ago, it still has not happened. The promised Israeli move is also woefully inadequate. While the ability of Palestinian Americans to fly into the country is important, it is only one of the many serious issues that have been raised about Israel’s behaviour toward Palestinian and other Arab Americans. Of even greater concern is how Israel treats Arab Americans upon entry— whether in the airport or crossing over the bridge. People suspected of being of Arab descent are routinely singled out for special screening that will often involve hours of repeated harsh interrogation, downloading of information from their phones and laptops, and sometimes even strip searches. It must be noted that it’s not just Palestinian Americans, who carry a Palestinian identification card, who receive this treatment, and it’s not only at the point of entry. We have documented statements received from hundreds of Arab Americans, from a variety of backgrounds who report harrowing and degrading treatment on both entry and exit from Israel. A few examples:

A Palestinian American deacon in the Orthodox Church who, with a fellow clergyman, was on a pilgrimage to the Holy Land was told on arrival at the airport that he could not enter because he was of Palestinian descent and needed to go to Jordan. When he replied that he was an American and pointed to his passport, the border official said, “What do you want me to do, kiss your passport? To us, you’re not an American, you are an Arab.” After detaining him for hours, he was forced to buy a ticket and return to the USA.

A Lebanese American woman, who was teaching in the West Bank, went on a vacation to Europe. She was detained and interrogated for hours on return and eventually denied entry because the Israeli officials were concerned that she sought to settle in the West Bank. Because she couldn’t return to her school, she lost her job and was forced to return to the USA.

A US-born Lebanese American was on a business trip to meet with potential partners in the West Bank. He was detained for six hours and repeatedly interrogated about his father’s village in Lebanon, his family history, his position on Palestinian rights. He was eventually allowed in but experienced the same treatment on departure from Ben Gurion Airport.

Each of these stories and hundreds more have been sent to the State Department. And little or nothing has been done. What is most unsettling is not just the Israeli behaviour, but the way the US government has appeared to acquiesce to it. The State Department knows about these reports which is why they post a “Travel Advisory” telling Arab Americans to expect to be treated in a discriminatory manner. When victims of this abuse have called the US Consulate in Jerusalem asking for assistance they have been told “there’s nothing we can do to help you.” While several Secretaries of State have said that they have raised this issue with the Israeli government, “raising the issue” apparently isn’t enough because it continues.

In the end, this isn’t just about visa waivers; it’s also about the US government not taking seriously its obligation to protect the rights of its own citizens. The US Passport reads, “The Secretary of State of the United States hereby requests all whom it may concern to permit the citizen/national of the United States named herein to pass without delay or hindrance and in case of need to give all lawful aid and protection.”

There is also a 1951 US-Israel Treaty of Friendship, Commerce, and Navigation, which states that US citizens going to Israel be permitted to “travel therein freely, and to reside at places of their choice; to enjoy liberty of conscience…and to bury their dead according to their customs.” Furthermore, the treaty prohibits Israel from “unlawful molestations of every kind” and guarantees that US citizens be offered “constant protections and security.”

With their discriminatory entry-exit polices, Israel has, in effect, declared that they recognize three distinct classes of American citizens: American Jews with special privileges, other Americans whose rights are expected, and Arab Americans, whom Israel does not recognize as full Americans. By failing to stand up to this bigoted policy, the USA is, in effect, upholding it. The protection of US citizens’ rights should not be a matter of debate or compromise between the US government and any other country. And hollow gestures allowing Palestinian Americans to fly into Ben Gurion does not absolve the US government or Israel from fulfilling their respective obligations.