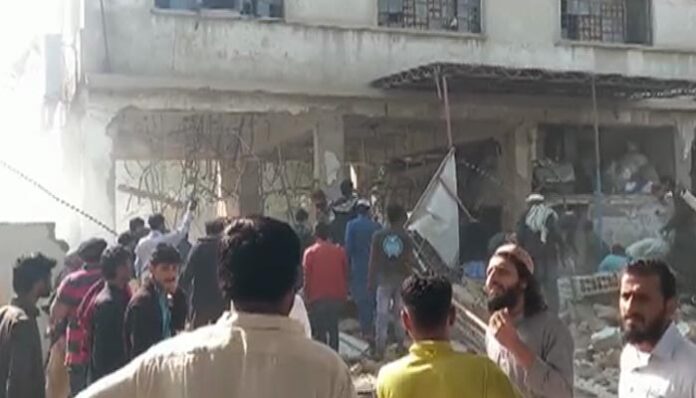 A powerful gas explosion occurred in a nullah near Paracha Chowk in Karachi’s Shershah area on Friday.

The police officials stated that no casualties have so far been reported.

Police further stated that encroachments on the nullah were already removed while further investigation regarding the blast is underway.

It is pertinent to mention that last month, a blast near the same location had claimed the lives of at least 16 people, while more than a dozen people were left injured.

PTI MNA Alamgir Khan’s father was among those who passed away in the explosion last month.

Police while revealing the details of the blast stated that the blast took place in a gas pipeline running through a nullah located in the area, causing immense damage to the building of a private bank that was constructed atop it.

However, there was no lead suggesting that the blast might be linked to terrorism.

In this regard, the Sui Southern Gas Company (SSGC), in a statement, stated that its team had confirmed that there was “no SSGC gas pipeline” in the area.

“The gas pipelines installed in the area are safe and they have not incurred any damage.”

He was a written-off asset in the world of terror; specifically, Islamist terror. Dr Aiman Zawahiri, the number 2 of one-time terror group Al...
Read more
HEADLINES

BEIJING: China and Pakistan have agreed on participation of third parties in China-Pakistan Economic Corridor (CPEC) and exchanges among media and think thanks, including...
Read more
HEADLINES