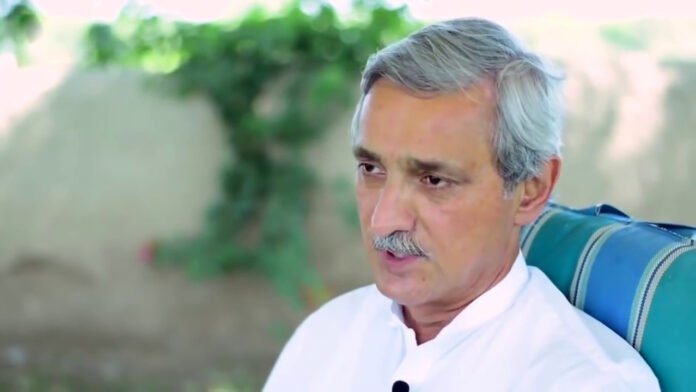 Jahangir Khan Tareen, once considered one of the closest confidantes of Prime Minister Imran Khan stated about the possibility of joining the PML-N that his long-standing ties with Nawaz Sharif’s party will continue like before, while adding that his ‘plane’ could take off in any direction even towards the PML-N.

Tareen, along with other political leaders attended a ceremony related to PML-N leader Khwaja Saad Rafique’s daughter’s wedding in Lahore.

At the occasion, Tareen stated that “Khawaja Saad is a brother to me and we have remained together like close relatives”.

In this regard, PML-N leader Ayaz Sadiq, who was also attending the gathering, asked the  reporters that they should ask Tareen why he kept smiling to the question of joining the PML-N, while adding that “whether it’s Jahangir Tareen or any other leader of the PTI, everyone except [Prime Minister] Imran Khan, is smiling”.

“Jahangir Tareen is himself looking like a groom in this wedding ceremony,” another journalist quipped.

At this, Tareen group’s leader Raja Riaz remarked, “I congratulate Jahangir Tareen for looking like a groom”.

It is pertinent to note that last month, the disgruntled PTI leader had said that he had never paid for the “household expenses of Bani Gala” in response to the claim of former party leader Justice (retd) Wajihuddin Ahmed.

Wajihuddin had accused Prime Minister Imran of taking money from Tareen in tunes of Rs3 million per month to run his Bani Gala household.

Punjab Education Minister Murad Raas has given directive to private schools to make dupattas or scarves a compulsory part of the school uniform for...
Read more
HEADLINES

BAGHDAD: As Iraq's Shi'ite leaders jostle to secure a majority in the newly-elected parliament, Sunni and Kurdish minorities have been caught up in a...
Read more
HEADLINES

Prime Minister Imran Khan and the Leader of the Opposition in the National Assembly Shehbaz Sharif have refused to sit together for years. However, the...
Read more
- Advertisment -

Religious tourism is likely to pick pace between India, Pakistan

January 23, 2022
LAHORE: Religious tourism is likely to pick pace between the two archrival neighbours India and Pakistan.   Following the arrival of Indian tourists in Pakistan earlier...

Trade with Kyrgyzstan to open Eurasian markets for Pakistanis: envoy