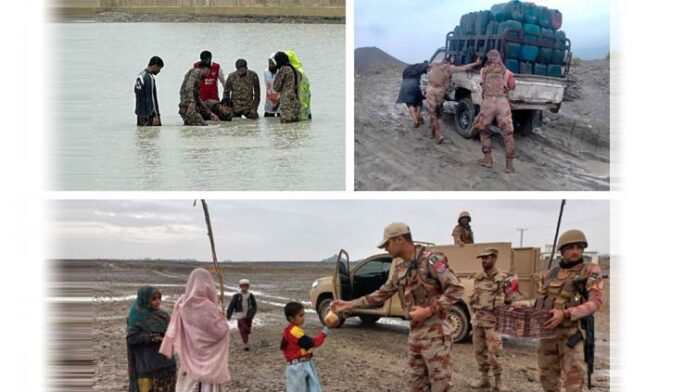 It is pertinent to note that the operation began after the coastal belt of the province was hit by heavy rainfall and floods, the military said, while adding that the rescue and relief operation has been carried out for the last 96 hours.

The recent downpour and subsequent floods have wreaked havoc in the low-lying areas of the coastal city, causing severe damage to houses and infrastructure alike.

The ISPR further stated that the Army, FC and Pakistan Coast Guards have established medical camps and distributed rations to flood victims.

“PAF C-130 sorties loaded with rations and clothing have also been flown to assist the population of Pasni.”

It said that the damage assessment is also underway, adding that efforts were being made to reach out to stranded families to render relief to far-flung areas.

It merits mention that on Thursday, Deputy Commissioner Gwadar during a meeting informed that PDMA has launched a rescue effort on an emergency basis.

Around 2,478 families have been affected while 22 villages have been cut off due to floods. The administration has launched an operation to reach the 22 cut-off villages and help the villagers. Relief items were delivered to different areas of Kupar and Pasni.

The meeting was also informed that due to heavy downpour many small dams collapsed across Gwadar, affecting 41 villages and 1,786 households and more than 10,000 people in Klanch.

Former central information secretary of PTI Ahmed Jawad on Sunday announced that he will file a lawsuit against the party for terminating his membership. On...
Read more
NATIONAL

Russia’s Foreign Ministry on Sunday rejected a British claim that Russia was seeking to replace Ukraine’s government with a pro-Moscow administration, and that former...
Read more
NATIONAL