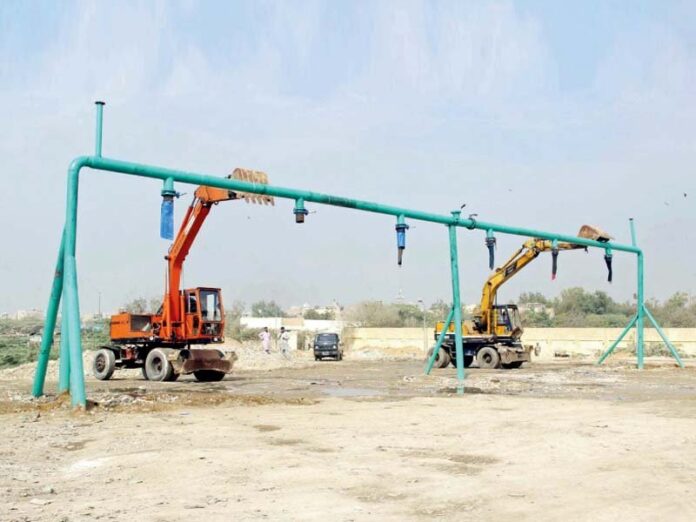 The Water Board Anti-Theft Cell in-charge and the Chief Security Officer Water Board conducted a joint grand operation against illegal hydrants and demolished another illegal hydrant within the limits of District Malir Memon Goth on Saturday.

On the instructions of Sindh Local Government Minister and Chairman Karachi Water and Sewerage Board Syed Nasir Hussain Shah and MD Water Board Engineer Asadullah Khan, the operation of Water Board against illegal hydrants continued for the second day.

The anti-theft cell in-charge said that the suspects used to steal water from District Malir through illegal hydrants and sell it in different areas of the city through tankers. He added that hundreds of feet of pipes had been seized during the operation.

“They will be brought to justice and further action will be taken against them,” he said.

It may be mentioned that three illegal hydrants have been demolished within the limits of District Malir Memon Goth in the ongoing operations of the Water Board since Friday.

On the other hand, Sindh Local Government Minister and Chairman Karachi Water Board Syed Nasir Hussain Shah said that the scope of operation against water thieves should be widened and those who steal water from the citizens should be brought to book and the operation should be done without any discrimination.

Farooq Sattar invites all MQM factions to sit together

All set for first phase of LB polls in Sindh today

KARACHI: Comprehensive security arrangements have been made while the distribution of polling material is completed as voting in the first phase of local bodies'...
Read more
KARACHI

Set up medical board to ascertain Dua’s age, court orders

KARACHI: A judicial magistrate here in Karachi on Saturday ordered the formation of a medical board to ascertain the age of free-will marriage girl...
Read more
KARACHI

KARACHI: The two-day conference titled: “Extreme Reporting: Conflict and Peace in the Digital Age” was started at Centre of Excellence in Journalism at the...
Read more
KARACHI

Medical board set up for Amir Liaquat autopsy tomorrow

KARACHI: A six-member medical board has been formed for the exhumation of Aamir Liaquat’s body and conduct an autopsy on court’s orders. According to details,...
Read more
KARACHI

KARACHI: The Sindh Counter Terrorism Department (CTD) on Sunday claimed to have arrested a "most wanted" terrorist of the outlawed Tehreek-i-Taliban Pakistan (TTP) from...
Read more
- Advertisment -