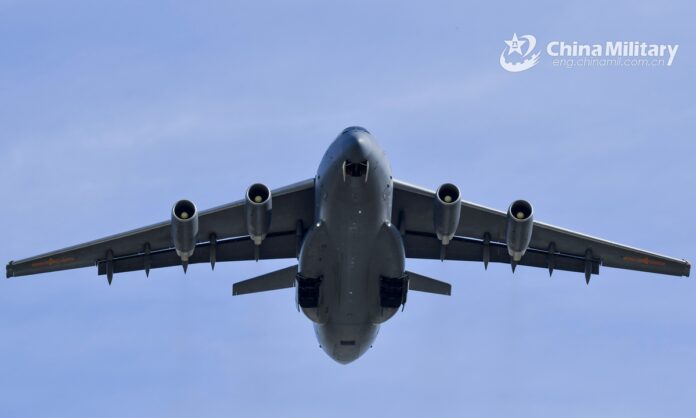 BEIJING: The Y-20 large transport aircraft of the Chinese People’s Liberation Army (PLA) Air Force is making a major difference by delivering hundreds of thousands of defence related items of newly developed cold-resistant clothing and equipment to Chinese border defense troops stationed in the plateau regions to brave the winter amid the border standoff with India.

The mission demonstrated the Y-20’s outstanding operational capability in high-altitude airfields, as the cargo plane will help enhance the PLA’s logistics support capability in plateau regions, experts said on Sunday. They said that the aircraft can also transport heavy equipment like tanks and helicopters to the frontlines in rapid-reaction operations when necessary.

In the undated transport mission, three Y-20 planes carrying about 160,000 sets of newly developed cold-resistant clothing and equipment took off from an airfield in the south of East China’s Jiangsu Province, and arrived in Ngari prefecture, Southwest China’s Xizang (Tibet) Autonomous Region and Kashi prefecture, Northwest China’s Xinjiang Uygur Autonomous Region respectively after about seven hours, so the border defense troops could receive the winter gear as fast as possible, js7tv.cn, a video news website affiliated with the PLA, reported on Saturday.

The rapid-reaction mission featured challenges like takeoff and landing in high-altitude airfields and long-range flight in late mid-night, Li Lingchao, deputy chief of staff at the PLA Air Force Aviation Force regiment that carried out the mission, was quoted in the report as saying.

“As a vital part in the strategic aerial transport forces, we have this capability and confidence to conduct missions and win fights at any time,” Li said.

Developed by the Central Military Commission Logistics Support Department, 10 types of clothing and equipment, including a long version of a cotton-padded coat, a thermos flask, anti-fragment goggles, electrically heated gloves, kneecaps and shoe-pads, and a camouflage suit for snipers, are on offer to the frontier soldiers. All new clothing and equipment are products containing high technologies, which means they are warm, protective, light and agile.

The procurement of the new winter gear took only two months, and their delivery into the hands of the frontline troops took only 24 hours, when taking the time to transport them from factories to the airfield into account, js7tv.cn reported.

Analysts said this delivery shows the PLA’s focus on its border defense troops’ quality of life, which is also a point of attention by Chinese netizens, particularly after the border conflict with India in 2020 and the standoff since.

The large transport aircraft can also transport heavy, large military equipment like tanks, armored vehicles and helicopters to high-altitude frontlines in rapid-reaction operations just as they did with the winter gear, Fu said.