PM Imran asserts world should incentivise Taliban, not attempt to control them 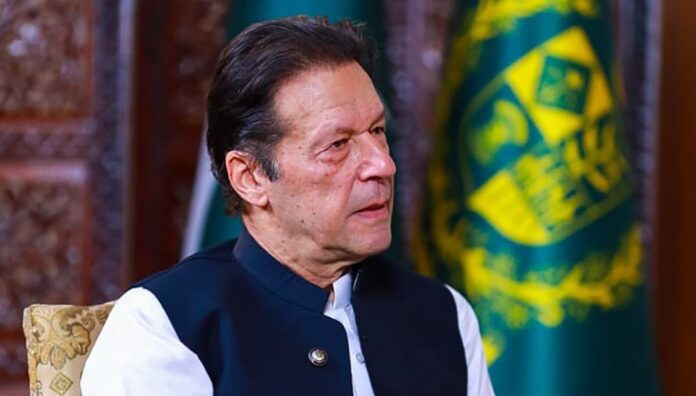 Prime Minister Imran Khan on Wednesday warned that Afghanistan could not be controlled from the outside and instead insisted that the global community should make efforts to incentivise the Taliban administration so that the current crisis could come to a close.

In an interview with CNN’s Connect the World, the premier said that Afghanistan’s current government clearly feels that without international aid and help, they will not be able to end the currently brewing economic crisis.

When asked by the host, Becky Anderson, about the interim government of Afghanistan not being inclusive,  he said: “Afghanistan’s current government clearly feels that without international aid and help, they will not be able to end the crisis… we should push them in the right direction.”

“Where Afghanistan goes from here, I am afraid none of us can predict,” the premier responded. “We can hope and pray that there is peace after 40 years.”

“Taliban have said that they want an inclusive government, they want women rights in their own context, they want human rights, they’ve given amnesty… so far what they’ve said clearly [indicates] they want international acceptability,” he added.

The premier said that it is a “fallacy” to think that Afghanistan can be controlled from the outside. “They have a history… no puppet government in Afghanistan is supported by its people, it gets discredit amongst the people.”

“But if it goes wrong, and which is what we are really worried about, it could go to chaos, the biggest humanitarian crisis, a huge refugee problem, unstable Afghanistan and […] the possibility of again terrorism from Afghanistan’s soil,” he added.

When pressed about concerns regarding women’s rights, Imran said it was a “mistake” to think someone from outside would give Afghan women their rights.

The women in the neighbouring country are strong and the international community should give them time and they will get their rights themselves, he maintained, adding that the women should have the ability in society to fulfil their potential.

“In Pakistan, what we have done is we have actually paid stipends to poor families to get the girls to study in school because we feel that if the girls, if the girl child studies, if they have education, they will get their own rights,” he added.

It is pertinent here to mention that women have been omitted from the Taliban’s hard-line interim government, have been ordered to stay at home in some areas, and their education restricted. Protests against Taliban rule and for civil rights have been violently suppressed, with reports of journalists being arrested and severely beaten.

Moreover, many in the international community are not hopeful the Taliban will make any progress on upholding women’s rights. The Taliban, who ruled over Afghanistan from 1996 until 2001 but were forced from power after the US-led invasion, have historically treated women as second-class citizens, subjecting them to violence,

To critics who say the Taliban will destabilize the country, PM Imran pointed to the withdrawal of the Soviets in 1989, which resulted in a “bloodbath.” Khan said he was expecting a similar bloodbath to happen after the US forces left.

“Our intelligence agencies told us that the Taliban would not be able to take over all of Afghanistan, and if they tried to take Afghanistan militarily, there would be a protracted civil war, which is what we were scared of because we are the ones who would suffer the most,” Khan said. Now, he said, the world should “give them time” to form a legitimate government and make good on their promises.

Speaking on Pakistan-US ties, PM Imran said that at one point there were 50 militant groups attacking the government just because Pakistan supported the US.

“[Former US president] George Bush asks Pakistan for help and he famously said we will not abandon Afghanistan again. Pakistan joined the US war in Afghanistan. Was I the prime minister at that time I would’ve never ever done that,” he added.

He said that after the US invaded Afghanistan, we told the same Mujahideen that what they were doing was terrorism, which he added turned them against Pakistan.

“The Pashtun nationalism kicked in on our side of the border in the tribal belt. They had all sympathies with the Taliban not because of religious ideology … you have to understand what happened and I really want people to know… they turned against the Pakistan Army as collaborators so the Jihadis turned against us, the Pashtuns turned against us and the more we tried the military operations in civilian areas, we had more collateral damage… we had 50 militant groups attacking us and on top of it … they must also know… there were 480 drone attacks in Pakistan by the US… that’s the only time a country has been attacked by its own ally.”

The premier said there were three million people living in Afghan refugee camps and “we were supposed to check which one of them were Taliban and which were not.”

On a question about the alleged involvement of Pakistan intelligence agencies with the matter of Taliban, the premier said that Pakistan simply does not have a budget to fund another war.

“You know the total budget of Pakistan? It is $50 billion for 220 million people… Americans were spending $300 million a day… they spent $2 trillion [in total]… did we had the capacity to fund another war? We can barely meet our own expenses,” he added.

Moreover, it is noteworthy that the premier has previously criticized the US’ exit from Afghanistan and said he has not spoken with President Joe Biden since the Taliban takeover, despite Pakistan being a major non-NATO ally.

“I would imagine he’s very busy, but our relationship with the US is not just dependent on a phone call, it needs to be a multidimensional relationship,” said Imran Khan during the interview.

That’s something Khan doesn’t feel Pakistan enjoyed during the US’ 20-year war in Afghanistan. “We (Pakistan) were like a hired gun,” Khan said. “We were supposed to make them (the US) win the war in Afghanistan, which we never could.”

The premier said that he repeatedly warned US officials that America could not achieve its objectives militarily, and would “be stuck there.” He said the US should have attempted a political settlement with the Taliban from a “position of strength,” at the height of its presence in Afghanistan, not as it was withdrawing.

Pakistan has had deep ties with the Taliban and has been accused of supporting the group as it battled the US-backed government — charges denied by Islamabad. In 2018, Pakistani authorities released top Taliban official Mullah Baradar from jail with the express purpose of negotiating with the US. Last week he was named deputy prime minister in the Taliban’s all-male cabinet.