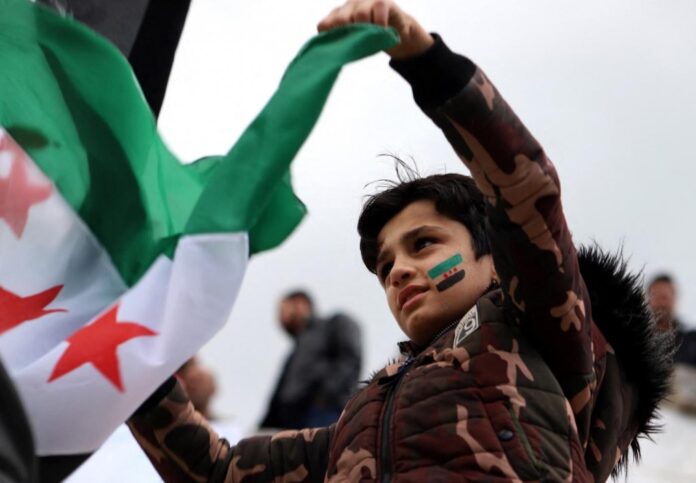 It’s been a decade since the conflict in Syria began, and the toll has been staggering. Over one-half million have been killed, a quarter of whom are civilians. More than one-half of Syria’s pre-war population of 21 million have become either refugees or internally displaced persons– in near equal measure. Most Syrian children have lost years of education and normal social development and are living in poverty without adequate services. And there’s still no end in sight.

From the beginning it should have been clear that nothing good would come of the relentless blood-letting. The regime in Damascus had become ossified, corrupt, and repressive. When confronted by an initially non-violent revolt, they responded with unspeakable brutality. Too quickly, the opposition resorted to armed violence, which only intensified the regime’s assaults.

One year into the war, I wrote:

“Syria continues its long slow descent into hell, with violence and tragedy showing no let up. By now it has become clear that neither side can win an easy victory, reaffirming the adage (learned from Lebanon’s long war) that there can be no victor, no vanquished.”

Some of my friends who supported the opposition upbraided me for not joining their call for more US involvement. They wanted a US-enforced no-fly zone to stop the regime’s deadly bombardment of Syrian civilian areas and more weapons for opposition fighters.

What they didn’t understand was that with the USA winding down its disastrous involvement in Iraq, the Pentagon was in no position to commit itself to another unwinnable war. And with Syria, already having become a playground for regional global powers (specifically, Russia, Turkey, and Iran), any increase of support for one side would only end up accelerating the support to the other side.

Early in the conflict, I spoke at two different events hosted by Syrian Americans. I was struck by the gap in perceptions that marked the two group’s understanding of what was happening in their homeland. One group celebrated the courage of the opposition noting, “the fear of the regime has ended.” The other group, while not supporters of the regime, spoke mainly of their fear of the opposition. Many were secularists, Christians, or other minorities who, having watched Iraq’s unravelling and listening to the extremist opposition groups’ rhetoric, expressed their fear of what might follow the fall of the regime. I tried to bring the two sides together in the hopes that they might better understand each other’s concerns– but it was to no avail. Both saw victory for their side as the only acceptable outcome and possible with just a bit more time and support.

A decade ago, I projected four scenarios that might play out in Syria. 1) The regime could reestablish its repressive rule. 2) There could be a prolonged and devastating civil war (with external parties supporting opposing sides). 3) There could be an uneasy truce leading to a somewhat stable modus vivendi. 4) There could be a negotiated solution with “no victor, no vanquished” and Syria on its way to creating a new social order.

Today, Syria appears to be stuck between 2 and 3. There is a fragile status quo in which clashes are less frequent but the situation remains volatile. While the regime retains control of much of the now-destroyed country, it does so largely with the backing from Russia and Iran. Turkey occupies parts of northern Syria and provides cover for armed extremist groups. The USA, together with Kurdish and some Syrian opposition armed forces, controls areas in the northeast, including Syria’s main oilfields. And Israel appears to be using the sites controlled by Iranian allies to test the lethality of its newly acquired American weaponry.

Several Arab states, realizing that this conflict has entered a dead end, are pushing to reintegrate Syria and Assad into the Arab fold, if only to help release the country from Iran’s grip. They appear to favor siding with Russia, long a Syrian ally, seeing its role in the country as less destabilizing than that of Iran.

Despite the clear evidence that no one can win– Syria’s competing groups and their allies still appear unwilling to take the situation to the fourth scenario– a negotiated solution which protects and prioritizes the Syrian people and the future of Syria’s children.

A decade ago, I asked who would stop “Syria’s descent into hell?” After having spent 10 years in hell, today’s question is “Who will rescue Syria from hell?” It remains a question that only Syria’s leaders, and their backers, can answer.