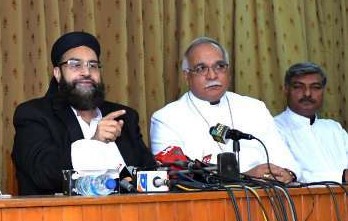 LAHORE: Special Representative to Prime Minister on Religious Harmony Hafiz Tahir Mehmood Ashrafi on Friday said that the religious minorities in Pakistan are enjoying equal rights and the government is making efforts to address the challenges being faced by the marginalised groups.
Addressing an “Istehkam-e-Pakistan” conference at the Praying Hands Cathedral Church, hosted by Bishop of Raiwind Diocese Dr Azad Marshall, Ashrafi said that no persons or groups would be allowed to impose their beliefs on any minority group.
“Prime Minister Imran Khan has taken notice of complaints of forced conversions of minority girls and the misuse of the blasphemy laws, and the government is making sincere efforts to address these issues through effective legislation,” he said.
He added that the minorities have complete freedom to perform their religious rituals. “Islam gives a message of love, peace, harmony and brotherhood,” he said.
Ashrafi said that the country’s foreign policy is completely independent and the National Action Plan against terrorism and extremism is being implemented in letter and spirit. “The operation “Raddul Fasaad” was successful due to the joint struggle of the Pakistani army and nation. We salute the martyrs and “ghazis” of the operation,” he said.
Addressing the moot, Bishop Marshall, who is also the president of National Council of Churches in Pakistan, urged the government to ensure integration of religious minorities in the national mainstream.
“Christians have always played a constructive role in the development and solidarity of Pakistan. We love our country and we are always available for defending our motherland against all enemies, foreign or domestic,” he said.
Marshall said that while it is heartening to see minority people being included in the mainstream, there is still a lot more that needed to be done at the government level to ensure their equal rights and protection from extremist elements. “Forced conversions and marriages of minority girls and blatant misuse of the blasphemy laws are some of the major issues being faced by the religious minorities, especially Christians and Hindus. We urge the government to bring effective legislation in this regard as well as form a high-level panel, comprising representatives from the religious and political leaderships, to address these concerns,” he said.
The church leader said that Christians are patriotic and would continue to project Pakistan’s national interests on all international forums. “We have been voicing our concern against the atrocities being committed against innocent Indian Christians and Kashmiri Muslims by the fascist Modi regime and we demand that the world community should take notice of the gross human rights violations being committed in our neighbouring country,” he said.