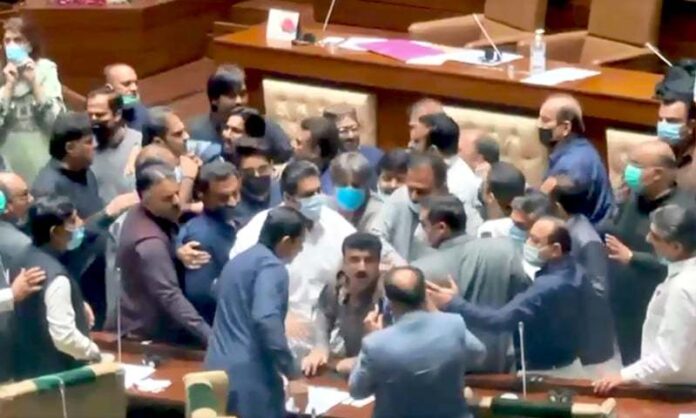 KARACHI: Pakistan Tehreek-e-Insaf (PTI) has served show-cause notices on its two legislators from Sindh on charges of violating the party discipline in the run-up to Wednesday’s Senate elections.

MPA Aslam Abro and Sheharyar Khan Shar were issued the notices on March 3 (Wednesday) from the office of the party’s Standing Committee on Discipline and Accountability chairman Salman Aftab.

The MPAs were directed to explain their position for making accusations against party leadership “which went viral on social, print and electronic media”. The notification said the act was against the PTI’s policy and its constitution.

The matter has been referred to the PTI’s Western Region Standing Committee on Discipline and Accountability for action against the two lawmakers within seven days.

The notice came days after the two MPAs announced they would not vote for the PTI candidates in the Senate elections because they were not taken on board while awarding the tickets for the polls.

The PTI faced several challenges to its candidates for the Senate elections. Last week, disgruntled PTI leaders from rural Sindh had approached Governor Imran Ismail, also a PTI stalwart, to express their reservations.

In a letter, the PTI officials had said they were “extremely disappointed with the entire process” of the selection of candidates for the polls and demanded the party’s high command cancel the nomination of Abro and Minister for Water Resources Faisal Vawda and award tickets to “party loyalists”.

Separately, eight appeals were filed against the decisions of the returning officers over acceptance and rejection of the Senate hopefuls from Sindh.

Two appeals were filed against Abro, while an appeal was filed against the acceptance of Vawda’s nomination papers on a general seat.