On the road for a Long March 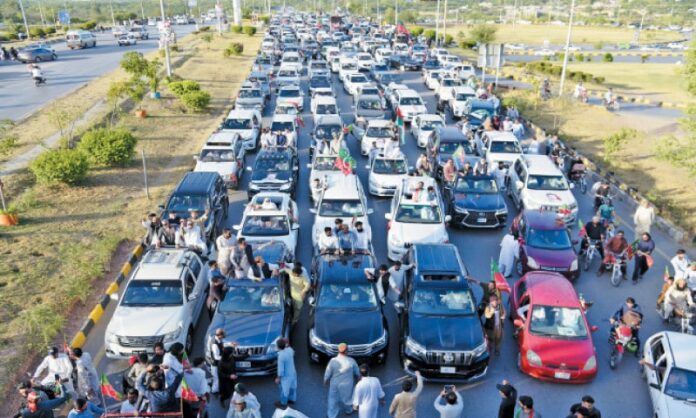 On October 19, Pakistan Tehrik Insaf (PTI) Chairman Imran Khan invited social media officials of PTI North Punjab to his residence and lashed out at the tactics employed by the incumbent government to control social media. He alleged that the government had been harassing and intimidating to muzzle the dissenting social media voices.

Khan was trying to motivate the party’s social media activists for the forthcoming Long March. It is known that the PTI’s over-reliance on social media has paid dividends in terms of the youth in the urban areas being induced into believing the narratives built by the PTI’s social media activists. The PTI has tried to approach the youth from an alternative platform of the media, other than the mainstream media, to spread its voice– no matter how untrue it could be. Apparently, the PTI has been successful in motivating the youth in its favour.

However, there is a downside to this phenomenon. For instance, the youth, without understanding the history of the country and even the history of Pakistan’s politics, has fallen prey to the PTI’s narratives, which are playing on the nationalistic and religious sentiments of the viewers. No speech of the Chairman PTI can be found without giving the famous “religious touch.” Seeking refuge in jihad and exploiting the term to achieve political objectives is a treacherous proposition, meant for bloodshed and split in society. The PTI leadership can also suffer from the boomerang effect of the same sentimentalism. The same is true for nationalism. Declaring political opponents against the state is a perilous trend. All military dictators resorted to undertaking the condemned practice of upping the ante of nationalism and stirring the soppiness of religion to rule over the country. Nevertheless, the religious touch spoiled careers and lives of the youth in the past.

Undoubtedly, social media has offered a platform alternative to the mainstream media, but the former is a major source of disinformation and propaganda. Spreading rumours and false news are now considered freedom of expression. Building and peddling false narratives about nationalism for serving the party’s purpose are the hallmark of the success of social media, which is informal in its essence. It offers more an activity of pastime than anything serious and substantial to the youth.

An effort to reach out to the masses may be a good idea but spreading rumours and fabricated news is a crime. Instead of making the youth aware and mature, the phenomenon plays with the sentiment and imagination of the recipients and hence plunders their minds. Can the cropped photos to abuse someone create a reality? Cropping offers service to neither politics nor society. Maybe unwittingly, the PTI is raising a generation which would live in the world of false narratives and fictitious realities instead of the real world’s veracities and actualities.

On the occasion, the Chairman PTI said that his party’s prospective long march would not be for achieving traditional political goals but it would be for getting real freedom, Haqeeqi Azadi. Through these words, he tried to convey to his social media team to spread this news to the recipients in whatever form possible. It is not known, however, how social media can make the youth convinced that the incumbent government is illegitimate, is imported, which should be toppled in favour of the PTI.

Interestingly, Khan still believes that the removal of the PTI’s government was due to a conspiracy hatched in some foreign country. This is the denial mode meant for overlooking ground realities. During its stint in power, the PTI could not manage to launch a single development project but it is now claiming that the country was progressing under its governance. The gap in performance is being filled by constructing the contrived narratives of patriotism and religiosity. The youth is equally pliable to the narratives and has not been holding the party accountable for its failure to deliver on the 2018 electoral promises.

The huddle also discussed preparations for the PTI’s forthcoming Long March on Islamabad and how to enthuse and mobilize the youth for the same. In the wake of victory in the recently held by-elections, the PTI wants immediate elections in the country. It says that the elections would ensure political and economic stability.