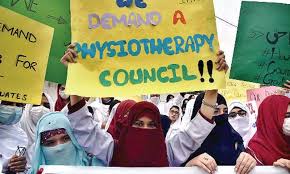 QUETTA: As many as 25 protesting physiotherapists on Sunday remanded in police custody after they were arrested late Saturday from the red zone area of the provincial capital.

The detained physiotherapists were produced before the court, which sent them to jail on one-day remand.

The representatives of the Physiotherapists Association had staged a sit-in protest last week in favour of their demands at the red zone.

The chief minister Balochistan assured them of resolution of their legitimate issues, however they continued their sit-in in the red zone causing disruption for the traffic system in the city.

The police had arrested 25 protesters against whom a case has been registered and presented them before a court in Quetta on Sunday.

Meanwhile, members of Physiotherapists Association organized a protest outside the Quetta Press Club for the release of the detained members.

Addressing the gathering, the office bearers of the association said that as many as 1,500 physiotherapists, who obtained degrees from various institutes were deprived of the government jobs in public hospitals.

For job opportunities in the hospitals, they had been protesting for more than four months by setting up a symbolic hunger strike camp in front of the press club.

They called upon the government to release the detained physiotherapists and ensure job opportunities for them.