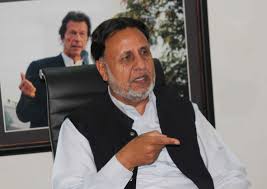 The provincial minister inspected the machinery received by the municipal committee under the program and announced another Rs one billion for MC over using maximum available funds till December.
The minister said that the Punjab government believes in serving the people.
Punjab Cities Program will be a milestone for the improvement of municipal services in 16 cities across the province.
Talking to media persons, Mian Mehmood-ur-Rasheed said that village panchayat councils will improve municipal service in rural areas under the new Local Government Act.
He said that the Khanewal city will get rid of sewerage problems for 50 years through Punjab Cities Programme.
Measures will also be taken for the restoration of Nishat Lake, the minister said.
Earlier, Provincial minister Local Government chaired a meeting at DC office and directed officials concerned to utilize the funds as early as possible.
‘I will check the works under the program on a monthly basis’. A cell will also be created in Lahore to monitor the work, LG minister added.
On this occasion, MPA Hamid Yar Haraj, former provincial minister Ashraf Sohna, PTI leader Masood Majeed Daha and others were present in the meeting. Deputy Commissioner Umar Iftikhar Shirazi gave briefing about the release of funds under the PCP and the work.